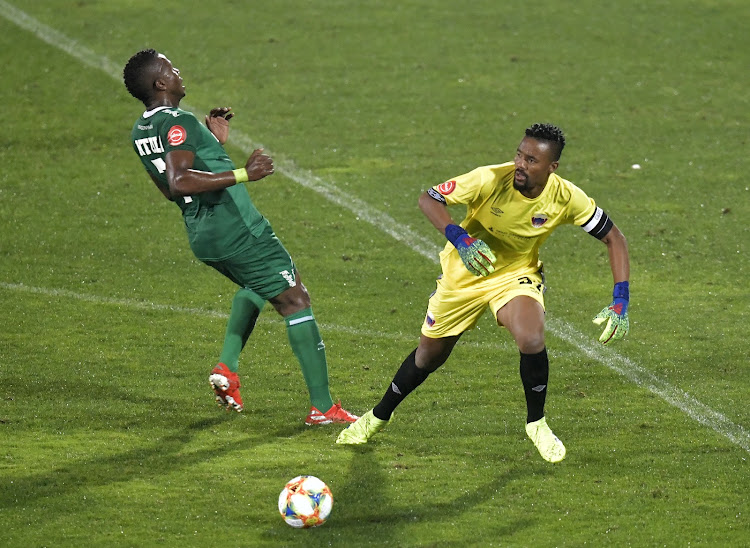 Veli Mothwa has not featured since 2016 and is yet to concede a goal in the three matches he has so far played for Chippa United.
Image: Anesh Debiky/Gallo Images

Chippa United goalkeeper Veli Mothwa has made a return to Premier Soccer League action for the first time in three years and his introduction has coincided with an upswing in fortunes for the side‚ but coach Norman Mapeza has provided lukewarm praise of his efforts.

The gloveman stands on the cusp of helping the side to a piece of club history this weekend‚ and has played a leading role in helping them to within a point of safety at the foot of the table after they had seemed cut adrift just a few weeks ago.

The introduction of Mothwa to the Chippa side was in many ways forced by the disastrous form of veteran Cameroon stopper Patrick Tignyemb‚ who made a number of very poor errors that contributed to defeats in recent months.

Mothwa’s career has been a controversial one that has failed to live up to early promise‚ but after three seasons of watching from the bench he has finally cracked the nod and is making up for lost time.

The 28-year-old was found guilty of signing contracts with both Polokwane City and Baroka FC in 2014 and fined R50‚000.

It also appeared to put the skids on his career as he made just one start and two substitute appearances in the last five years‚ and had not featured at all since November 2016.

But with Chippa a club in crisis this season‚ he was drafted into the starting line-up for the crucial match against AmaZulu on November 9 and in three matches has helped the club to seven points without conceding a goal.

Despite this‚ Mapeza offered faint praise‚ if any at all‚ for a player looking to rejuvenate his stagnated career.

“I am not someone who wants to talk much about individuals‚” Mapeza said.

“This is football‚ it is not tennis. In tennis you can talk about an individual. But football is about collective efforts.

Mothwa will be tested again when Chippa face Cape Town City on Saturday‚ a side who have drawn their last two games 0-0.

If he does manage to keep a clean sheet‚ it will be the first time in the club’s somewhat turbulent history that they have gone four games in a row without conceding a goal.

“We have managed to secure seven points in our last three matches without conceding‚ which is very positive‚” Mapeza said.

“We just need to keep working hard‚ we have some very important games coming up.”

After their visit to Cape Town‚ Chippa host SuperSport United in their final game of 2019 on December 21.