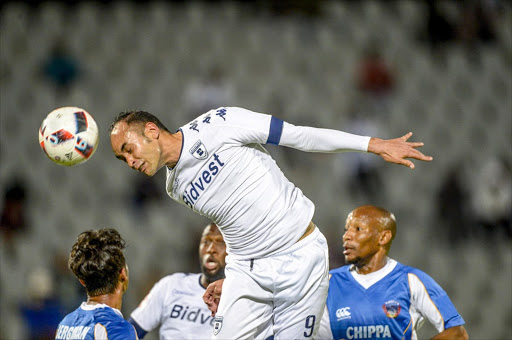 ELEAZAR RODGERS (BIDVEST WITS) Rodgers finally joined BidVest Wits at the start of the season after a number of near misses in the past and was an instant hit as the side made a fine start to the season‚ which included victory in the MTN8 competition. It followed two fairly low-key seasons at Platinum Stars‚ but such have been his performances that he was suddenly thrust into the lead striker role with Bafana Bafana‚ including their World Cup qualifier win over Senegal when he won a controversial penalty. His return to the national team in October added to two caps he had previously won in 2007 and 2008‚ meaning more than eight years between appearances. Picture Credit: Sydney Seshibedi/Gallo Images)

Bidvest Wits put in a disciplined performance to do what they needed to beating Chippa United 1-0 in Tuesday night’s Premier Soccer League match at Dobsonville Stadium.

Away from the normal closeness and compactness of their small but vocal support at Bidvest Stadium, Gabadinho Mhango headed Wits in front in the 54 minute.

The match was played in Dobsonville as a precaution due to fears of disruptions from the Fee Must Fall movement at Bidvest, which is on the Wits University campus.

Wits went top of the log on 16 point, two clear of Kaizer Chiefs, having played six games to Amakhosi’s six.

Clear chances were few to come by in the first half in a match played in a swirling wind.

In the 20 minute Buhle Mkhwanazi gave the ball away in his area to Chippa’s new signing Katlego Mashego, the experienced poacher rounding Darren Keet, with his attempt to roll in a finish from near the goalline finding the side-netting by inches.

Wits coach Gavin Hunt’s frustration at his side’s inability to pressurise Chippa’s playing the ball around at the back saw him make a substitution in the 33 minute, Ben Motshwari replacing Xola Mlambo in central midfield.

Wits ended the half strongly as Mhango turned centreback Bongani Kama inside out, the Malawian’s powerful shot smacking into the hands of goalkeeper Daniel Akpeyi.

At the other end Thembinkosi Lorch’s strong run past three defenders ended with the winger forcing a save from Keet.

Early in the second half Chippa gave away a throw-in deep in their half. The ball was worked to Elias Pelembe who had to stretch to get in a cross at the goal-line that found Mhango free to make no mistake placing his header past Akpeyi.

Wits continued searching for the scraps off of Chippa’s over-elaboration in their own half, though could only produce half-chances.