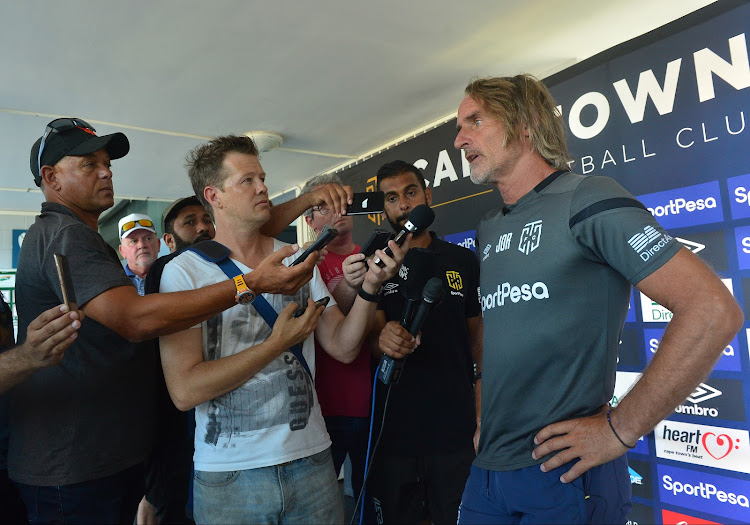 Cape Town City coach Jan Olde Riekerink hopes his side have turned the corner following their 2-0 victory over Bidvest Wits on Saturday that gives them a little breathing space from the teams at the foot of the table.

Thabo Nodada missed a second half penalty‚ but goals from Kermit Erasmus and Craig Martin sealed a precious victory for the struggling Citizens.

Having also beaten Baroka FC this year‚ as well as claimed a point against AmaZulu when they inexplicably let a two-goal lead slip at home‚ it has been a better start to 2020 for City‚ even if they have had a 3-0 loss at Kaizer Chiefs as well.

“It gives us a boost‚ there are a lot of teams on 17 points and this now creates a small gap. Hopefully we win the next games and keep this rhythm.

“Since the beginning of the year‚ OK we lost to Kaizer Chiefs‚ but I thought we played better there.

"It was three high balls [that led to goals]. But we have now had two wins‚ a draw and a loss‚ so it is a good start.”

Old Riekerink also praised the attitude and conditioning of his players to get a win in extremely windy conditions at the Cape Town Stadium.

“They [the players] showed‚ even under difficult circumstances‚ that they can play and we did well. Physically we were good‚ and we deserved to win. We were the better team.

“Both goals were very good. It is always about anticipation‚ that is where Kermit did well‚ the finishing was very good.

“If you are in a bad situation and you miss a penalty‚ then it can influence the team. But not this group‚ I must pay them a big compliment.”

City will be without the suspended Martin when they host Black Leopards on Friday night as he was sent to the stands late on against Wits after picking up two yellows‚ though Olde Riekerink thinks neither were deserved.

“They were two very soft yellow cards‚ but we have more than eleven players‚ we have a good squad.”

Victory on Friday would take City to ninth and on the brink of a place in the top eight‚ while at the same time widening the gap between themselves and the bottom of the league.

Minister of Sport and Recreation Nathi Mthethwa has sent his condolences to the chairman of the Premier Soccer League (PSL) Dr Irvin Khoza following ...
News
2 years ago

Chiefs focus on blunting Arrows
Sport
2 years ago
Next Article