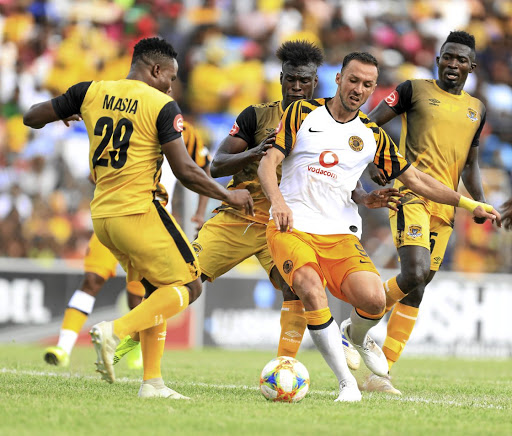 Samir Nurkovic outfoxes a number of Leopards players during their Absa Premiership match at Thohoyandou Stadium where he scored for Chiefs on Saturday.
Image: Philip Maeta/Gallo Images

Tough back-to-back away games are making life difficult for Kaizer Chiefs as anxiety grows about their flimsy lead in the Absa Premiership.

Amakhosi made the long travel to Venda, where they were held to a 1-1 scoreline by Black Leopards on Saturday.

Samir Nurkovic got the only goal for the visitors while Mogakolodi Ngele grabbed the equaliser for the hosts. "In the PSL it is the toughest place (Venda) to travel to, in particular having to play in the afternoon. It could have been a little bit easier playing in the evening," Chiefs coach Ernst Middendorp said.

Another arduous trip awaits Amakhosi as they travel to Durban to take on Golden Arrows on Saturday.

Black Leopards held Kaizer Chiefs to a 1-1 draw in their exciting Absa Premiership encounter at Thohoyandou Stadium on Saturday.
Sport
2 years ago

Chiefs now have 42 points from 18 games, with Tshwane neighbours Mamelodi Sundowns and SuperSport United lurking behind. Middendorp said his team will put the lessons learned in the Leopards game to good use against Arrows. "I don't believe too much in looking over big pictures. Our last game is always our reference point. This is now our last game and we will be using it looking forward to prepare ourselves."

Leopards, on the other hand, face a contrasting reality at the tail-end of the standings. The team is fighting for their lives in the relegation terrain where they now have 17 points from 18 games. Leopards coach Cavin Johnson expressed frustration at his team's poor defence. "In the last three games we have been playing good football but we concede goals in the first five minutes and that is a worry," he said.

Ngele had to be substituted after another injury setback during the game.

"It's very sad when something like that happens to quality players. We will have to try to get him back as soon as possible," Johnson said.