Chiefs coach Middendorp: 'Until May I even didn’t know Castro was able to speak English' 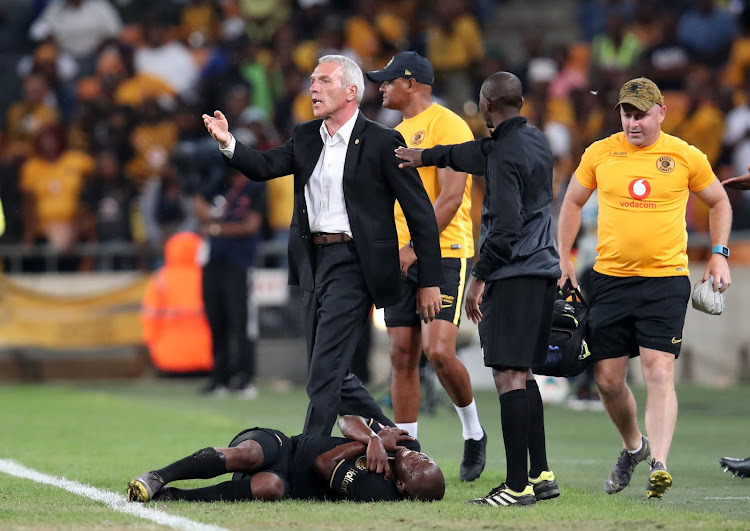 Ernst Middendorp, coach of Kaizer Chiefs reacts to the referee after Siphosakhe Ntiya Ntiya of Kaizer Chiefs was fouled during the Absa Premiership 2019/20 match between Kaizer Chiefs and Highlands Park at the FNB Stadium, Johannesburg on the 08 January 2020.
Image: ©Muzi Ntombela/BackpagePix

Ernst Middendorp says he realised during preseason that a rejuvenated Leonardo Castro could be a huge asset to Kaizer Chiefs in the 2019-20 season‚ especially in partnership with Samir Nurkovic.

Castro’s brace on Wednesday night in Chiefs’ 3-0 50th birthday match win against Highlands Park at FNB Stadium‚ which saw Amakhosi extend their lead at the top of the Absa Premiership to six points‚ took the striker to seven goals in 12 league and cup matches.

His six goals in nine league games puts him at joint-eighth in the PSL‚ and his partnership with Nurkovic (eight league goals) is a large part of Amakhosi’s free-scoring form at top the log.

Castro was missing suspended front partner Nurkovic against Highlands‚ and took the responsibility to lead the line with a brace.

Yet in the off-season Castro nearly left Chiefs.

He apparently had struggled to establish a relationship with Middendorp from the German’s arrival in the second half of 2018-19‚ where Castro only scored four goals in 21 league games for the campaign.

Talks were held‚ and Castro impressed Middendorp in preseason training‚ with the positive noises the coach was making on the striker by late July sounding the death knell instead for Madagascan Dax‚ as Chiefs had to cut their foreign quota.

“It’s unbelievable‚ probably it was my fault‚ I don’t know – until May I even didn’t know he was able to speak English in a proper way‚” Middendorp said.

“No‚ let’s be honest – he was actually very introverted and not really inside the team.

“And then he started showing up in a different way. And we started to unlock attitude and unlock a certain direction with all this experience we had in the final six months of the 2018-19 season.

“And yes‚ I saw it quite quickly during the preseason‚ where I thought‚ ‘Wow‚ this is something that could work’.

“In particular with Samir and him‚ to have two players up-front who are really putting a stamp in a different direction‚ and not really well-known in South Africa‚ with a certain power and physical presence.

“We made a decision quite quickly. Everybody was happy – he [Castro] wanted to stay. With a very clear understanding – the contract was there. And we moved on.

“I think he’s one player with something outstanding.

"And I’m very happy for him that he’s so successful.”