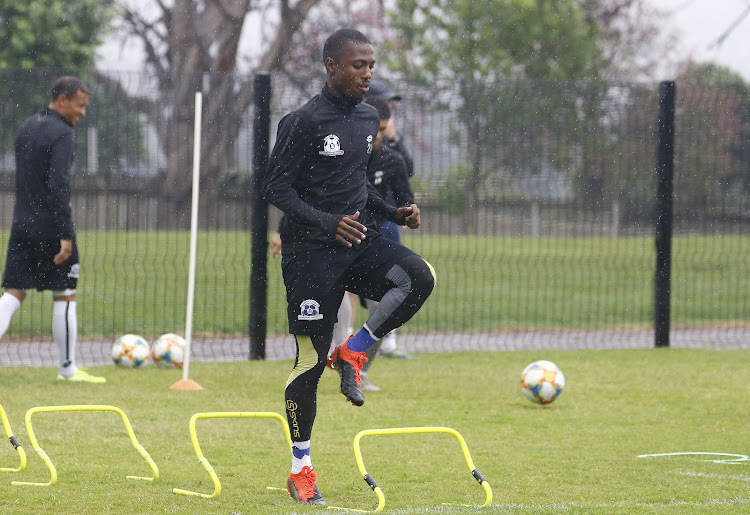 Maritzburg United midfielder Bandile Shandu may be only 24 years old but the player has such a presence that it seems as if he's been around forever.

Shandu made his debut in a 0-0 draw league match against AmaZulu FC as a 19-year-old on December 2013 and the midfielder‚ who was born in his team’s hometown in Pietermaritzburg‚ has never looked back.

He is now one of the most experienced players in coach Eric Tinkler’s team and it’s no surprise that he featured in the three matches that set up Maritzburg's Telkom Knockout final date against Mamelodi Sundowns at the Moses Mabhida Stadium in Durban on Saturday.

Shandu said he is looking forward to the final and he's excited as he was when Maraitzburg faced Free State Stars in the Nedbank Cup final in May last year‚ a game they eventually lost 1-0.

“There’s no feeling that beats the one of winning the cup itself.

"But I think everyone is excited and everyone is looking forward to it and working hard.”

The right-footed midfielder‚ who has been used wide and sometimes as a central attacking midfielder‚ played all the minutes in Maritzburg’s penalty shoot-out victories against Bidvest Wits and Highlands Park.

His most telling contribution came when he came off the bench to provide the assist that helped striker Judas Moseamedi find the goal to defeat Kaizer Chiefs 2-1 in the semifinals.

He said winning the trophy would be the cherry on the icing after the loyalty he’s given to his club since turning professional in 2013.

“It’s not just about me.

"Winning silverware as a team is more important‚” said Shandu‚ who turns 25 on January 19.

“It’s nothing personal but I think as a team we’ll be truly happy to get the silverware.

“We just need to be there and actually work hard and get the positive result.”

Shandu has also encouraged the Team of Choice's fans to come in their numbers and take advantage of playing in their home province.

“Just please carry on coming in numbers and we’ll work very hard to give something back to them‚” was Shandu’s message to the supporters.

“They truly deserve it.

"From last season they stuck by us‚ so I think to give them this silverware would mean a lot to them.”

Shandu said the team learned a lot from the defeat against Stars last year and they would use the experience motivate themselves in Saturday’s final.

“I think from the Nedbank Cup final‚ you grow as a player and as a person‚” he said.

“You know the mistakes that you’ve done and I think what matters is bouncing back from those mistakes and not letting those things happen again.

“So I think from then and now‚ I think I have grown.

"We all have grown from that experience and the heartbreak of losing in the final.

“So I think it will be a different ball game this time around.

“As I said‚ if we work hard and are willing to go the extra mile‚ we’ll definitely get a positive result.”

Shandu conceded that Sundowns have the advantage of experience and the personnel to win the game‚ he insisted that hard work would carry them over the line.

“Sundowns have got loads of experience and quality players in the starting line-up and on the bench‚” Shandu said.

“But to beat them we need to go there and work harder than them.

"They have got the experience of playing in Caf competitions and they’ve got a lot of games.

“They can rectify things easy because of the games they’ve been playing.

“But I think if we are to match all of that‚ we have just have to win the individual battles and work very‚ very hard.

"I think that will be the difference.”

Kids treated to early Christmas.
News
2 years ago
Next Article