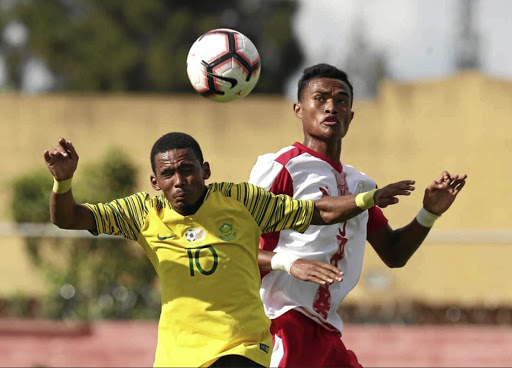 Oswin Appolis was given a yellow card against Mauritius. /
Image: SAFA \ TWITTER

Having received a yellow card in Amajita's opening match, a 5-0 win over Mauritius, where he netted a brace and scooped the Man of the Match accolade, Appolis was booked again in Sunday's 1-1 stalemate against Madagascar, triggering a one-match ban.

"He [Appolis] needs to learn to control his temper. In this situation, it is going to hurt the team because he's one of the most experienced players in the team, so losing such a player has a negative impact on the team, even on our chances of progressing to the next round might have been hurt," Mkhalele said.

Coach Helman Mkhalele was pleased with the character and resilience of his side as South Africa came from behind to secure what could be a precious ...
Sport
2 years ago

He further urged his charges to guard against ill-discipline, using Appolis's scenario as an example of a booking that could have been avoided. Bidvest Wits' Sinenjongo Mkiva scored Amajita's goal against Madagascar.

"This [getting yellow cards] is one of the disappointing factors," said the Amajita coach, who played as a winger for Orlando Pirates and Bafana Bafana in his prime.

"Players need to learn how to control their emotions because the yellow card that he got was unnecessary. We can't afford to have yellow cards that are collected from off-the- ball incidents . like kicking the ball away when the referee has given a decision against you [like Appolis did]."

SA, who are the defending champions, are top of Group B on four points, level with Madagascar but with a better goal difference. The winners of each of the three pools alongside the best runners-up across all the groups advance to the semifinals.

South Africa were held to a 1-1 draw by Madagascar in their 2019 Cosafa Under-20 Men’s Championship Group B clash on Sunday, and now face a tense ...
Sport
2 years ago

South Africa coach Helman Mkhalele was satisfied with his side’s opening 5-0 Group B victory over Mauritius at the 2019 Cosafa Men’s Under-20 ...
Sport
2 years ago

Two goals from SuperSport United youngster Oswin Appollis eased South Africa to a comfortable start at the 2019 Cosafa Men’s Under-20 Championship as ...
Sport
2 years ago
Next Article