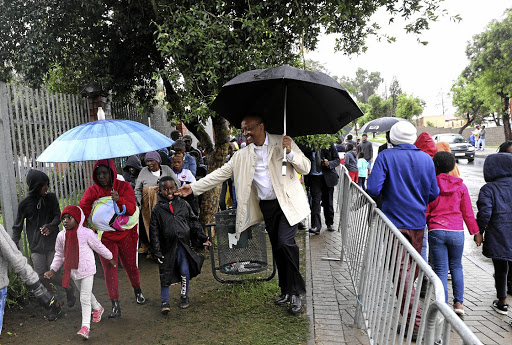 Patrice Motsepe cheers up kids in a long queue as they wait to receive their Christmas gifts at Orlando Stadium.
Image: Veli Nhlapo

Thousands of children braved the wet weather yesterday and flocked to Orlando Stadium to get early Christmas gifts from the Motsepe Foundation.

The children, who were soaking wet from the rain that has been falling nonstop in Gauteng for days, received gifts including soccer balls, toy cars, skipping ropes and dolls.

Although the queues were long, the children did not seem to mind and were all smiles after receiving their gifts during the foundation's 20th edition of the drive.

Orphans from the Orlando Children's Home were among the excited children who went to the stadium.

"They don't have parents and families to bring them gifts at the home, so this day has brought them so much happiness and excitement."

Mining mogul Patrice Motsepe arrived with his wife Precious Moloi-Motsepe. Motsepe was seen playing with some children inside a marquee.

A seven-year-old orphan who cannot be named to protect her identity said: "I received a skipping rope and got to have fun with Mr [Patrice] Motsepe, who I only got to see on TV ... and [may] God bless him for taking care of us. We normally share toys but today, I got one that is mine." 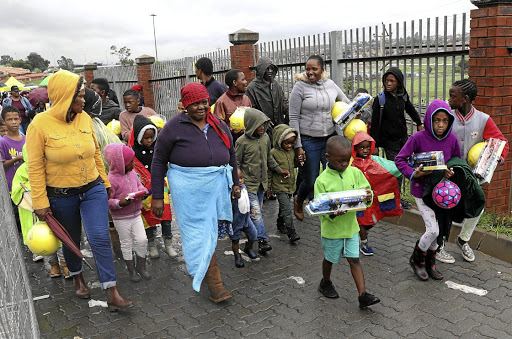 Some of the children who braved the cold and rainy weather walk alongside their parents and guardians after receiving their toys from the Motsepe Foundation at Orlando Stadium in Soweto yesterday.
Image: Veli Nhlapo

Nomkhosi Miya from Orlando East said she woke up at 5am to make her way to the stadium to beat the long queues. "I got my netball ball and my younger brother got a toy truck. We are very happy and thankful," she said.

Moloi-Motsepe said the programme is a national drive that is targeting all the provinces with thousands of toys to be donated to children.

"At Orlando Stadium alone, we have estimated 20,000 to 25,000 children and they have come out in great numbers, although it's cold, they waited in the rain and gave me big smiles and [were filled with] excitement," she said.

Moloi-Motsepe said they would be going around the country to reach out to children who are from disadvantaged backgrounds.

"It's a warm feeling to see the reaction of children, it's a good feeling to see children getting something unexpected and being so happy," she said.

Every year, the Motsepe Foundation buys presents for children from disadvantaged families, orphanages and other places.

"This year, the Motsepe Foundation bought over 285,000 toys for children in 60 townships, cities, towns and villages," said the foundation in a statement.

Billionaire businessman Patrice Motsepe and his medical doctor wife Precious Moloi-Motsepe aim to create thousands of jobs after launching a ...
News
2 years ago
Next Article