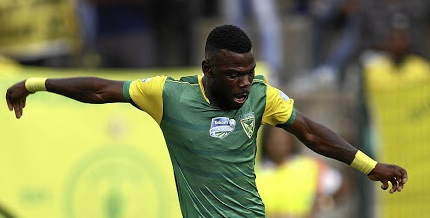 Golden Arrows striker Knox Mutizwa may be among the leading scorers, but challenging for the Golden Boot isn't in his mind, insisting he puts the team first.

Speaking to Sowetan at Sugar Ray Xulu Stadium shortly after their 2-1 Telkom Knockout semifinal defeat to Mamelodi Sundowns, a disappointed Mutizwa insisted that winning individual accolades was not his priority at all.

"At Golden Arrows, we don't want to win individual trophies, we want to win everything as a team. It's disappointing that we're not going into the final after losing to Sundowns," Mutizwa said.

The Zimbabwe striker, who arrived in SA to join Bidvest Wits in 2016, is among the leading scorers with seven goals alongside Highlands Park's Peter Shalulile (before last night's matches), Kermit Erasmus of Cape Town City and Bonginkosi Ntuli of AmaZulu.

"I see no importance in being happy alone while your teammates are not, so I prefer collective accolades," the striker maintained.

Mutizwa, 26, maybe the main man when it comes to scoring at the Durban club, but at his national team, he's been playing second fiddle to the likes of Khama Billiat and Knowledge Musona. The Arrows striker aspires to be as the top dog for The Warriors as he's for Arrows.

"In soccer you must be patient. I am working very hard to reach a level where I'll be the first choice striker for Zim as well, it's something that requires a lot of hard work," Mutizwa said.

" I believe that one day, I'll be Zimbabwe's top man as far as leading the attack and scoring goals is concerned."

Mutizwa is expected to play a central role again when Arrows face Baroka in a league outing at Peter Mokaba Stadium tonight (7.30pm).

"We must try to focus on the league now and put the TKO semifinal disappointment behind us. It's still early to despair, we'll fight until the end."

Kaizer Chiefs maintained their rich vein of form by beating Lamontville Golden Arrows 2-0 at the FNB Stadium on Tuesday night.
Sport
2 years ago

Cape Town City gave away a late penalty and extended their winless run to five games as they dropped home points in a 1-1 draw with a feisty ...
Sport
2 years ago