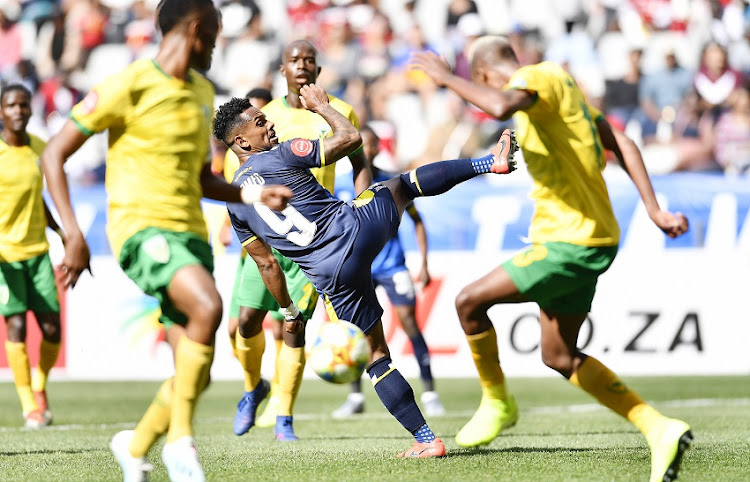 Cape Town City gave away a late penalty and extended their winless run to five games as they dropped home points in a 1-1 draw with a feisty Lamontville Golden Arrows in a windy Mother City on Sunday.

Kermit Erasmus had City in an unconvincing lead after 52 minutes with his fourth goal of the season but they concede a penalty four minutes from time which Knox Muitizwa tucked away.

The penalty was conceded by Ebrahim Seedat for a foul on substitute Sibusiso Sibeko.

“It’s a point we’ll take but I thought we could have taken all three,” said Arrows coach Steve Komphela.

“We had more chances. Had they had as many chances as us they would have killed us.”

It was a correct summation of the game which leaves City now with one win in seven outings this season and looking a far cry from the team that was a such a force last season.

It was the first Absa Premiership back at the Cape Town Stadium after all the issues with the poor surface but the pitch was still sandy in places and cut up quite easily.

But the game did not get going as the two sides cancelled each other out in a scrappy battle where Arrows defence proved stout and inhibited City’s running game, while looking to catch them on the counter in return.

Arrows had the first real chance of the season of the game in a goalmouth melee, asset up by Lerato Lamola’s probing run, after 10 minutes as City failed to clear their lines but managed to block Michael Gumede’s close-in effort.

A Riyaad Norodien freekick almost beat Arrows goalkeeper Edmore Sibanda as he tried to punch it away, rather than catch it, and it went up and over the bar in a touch of fortune for the keeper.

But the Zimbabwe international goalkeeper redeemed himself with a reaction save in the 38th minute as Taariq Fielies, making his return from stomach surgery, hooked an effort in on goal from a corner and Sibanda tripped it over with an acrobatic save that belied his bulky frame.

Abubakar Mobara suffered a serious looking ankle injury right at the end of the first half and was replaced by Mpho Makola at the start of the second stanza.

Erasmus rose above Nkosinathi Sibisi to get onto the end of Fielies cross to take a surprise lead. It was unusual to see the diminutive strike rise so easily above the defender.

City looked to be on their way to a much needed win but got caught on the counter with Seedat forced into the error.

Mutizwa gave peter Leeuwenburg no chance with his spotkick.