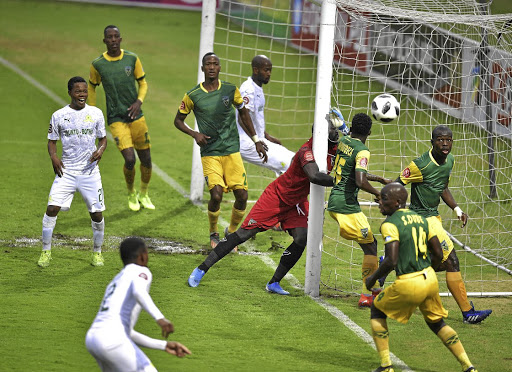 A howler from Mamelodi Sundowns goalkeeper Dennis Onyango sparked a second-half turnaround by Golden Arrows as they claimed a deserved 3-2 Absa Premiership victory in torrential rain at the Sugar Ray Xulu Stadium yesterday.

The result completed the perfect weekend for league leaders Kaizer Chiefs, who beat Soweto rivals Orlando Pirates 3-2 on Saturday, and then watched as their major
title challengers Sundowns and BidVest Wits both lost.

Chiefs now have a 10-point lead over second-placed Downs, who have a game in hand, but have looked sluggish in recent league encounters.

Thapelo Morena scored his first league goal since January to hand The Brazilians a deserved first-half lead, but after Onyango spilled Danny Phiri's shot into his own goal, two further strikes from Knox Mutizwa secured the three points for Abafana Bes'thende.

Mamelodi Sundowns and Golden Arrows will give fans a preview of what to expect when they clash in two weeks' time for a place in the final of the ...
Sport
2 years ago

Andile Jali netted a late goal for Sundowns to set up a grandstand finish, but they could not do enough to force an equaliser.

The Durban-based side remain unbeaten at home this season, a record that will be tested when the sides meet again in their next fixture after the Fifa International break as Arrows host Downs in their Telkom Knockout semifinal on November 23.

Sundowns were the better side in the opening half as Morena chose to shoot when he might have crossed for Mauricio Affonso in the middle of the box, his low skidding shot saved with his leg by Sibanda in the Arrows goal.

Lyle Lakay's corners then almost had the beating of Sibanda twice in quick succession; the first scrambled away by the keeper, the second cleared off the line by Matome Mathiane as the strong wind sucked the ball goalwards.

Sundowns hit the front five minutes before the break as Tebogo Langerman surged
into the box on the left-hand side and his low cross was turned home by Morena.

Both teams battled with the conditions early in the second period as the sodden pitch made passing difficult.