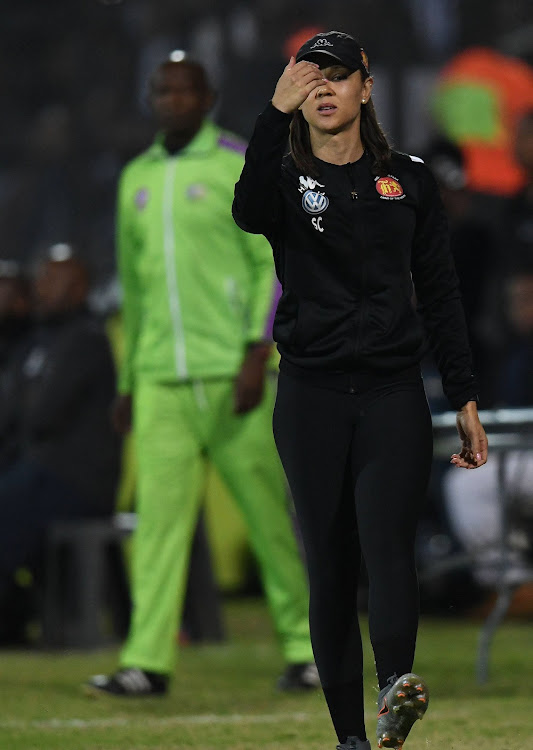 Mothobi Mvala has heaped praise on Simone Conley - Highlands Park's vivacious female fitness trainer - whose knowledge in dealing with both mental and physical fitness has enabled players remain strong even during trying times.

The Lions of the North were eliminated in the Telkom Cup by Maritzburg United via penalties in their quarterfinal on Friday night. That was their fourth game in 10 days. This is something new to Absa Premiership returnees.

"Recovery brings what we give out in each and every game," said Mvala yesterday.

"Obviously, it is normal, there will be that element of tiredness but you don't show it. We train hard but smart and credit must go to Simone. Every game we play we give our all and we continue to do so."

Highlands, who are fourth on the table, will be away to 11th placed Bloemfontein Celtic on Tuesday and then visit Stellenbosch in Cape Town on Saturday.

Mvala made it clear that they hand intended progressing to the semifinals of the TKO.

Highlands and the Team of Choice were level 1-1 after regulation time and the hosts at Harry Gwala Stadium in Pietermaritzburg proceed after defeating their visitors 4-3 on penalties after extra time.

"Some made use of that opportunity while others were not ready but nonetheless our game plan and general performance was okay," he said.

Mlungisi Mbunjana, who has been a revelation in the middle of the park for Highlands, netted an own goal in the 51st minute.

Maritzburg United must brace themselves for war against Highlands Park in the quarterfinal of the Telkom Knockout that will be played at Harry Gwala ...
Sport
2 years ago
Next Article