Ernst to continue his 'spectator' role 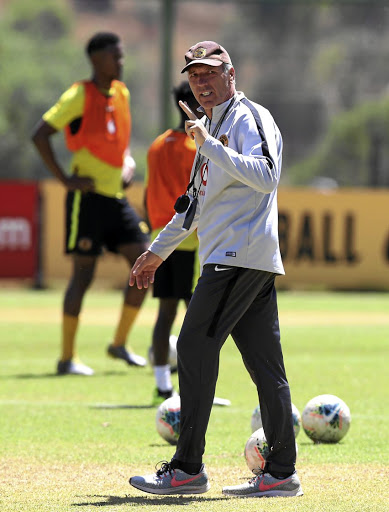 It has become a common occurrence for opposition fans to find themselves bumping into Kaizer Chiefs coach Ernst Middendorp in the stands during games.

On numerous occasions, the German has been spotted spying on opponents they will face in the near future.

Before beating Mamelodi Sundowns 2-0 on Sunday, he watched Downs' previous wins against AmaZulu (5-0) and Highlands Park (1-0).

Middendorp has moved to explain his preference for personally watching games as opposed to analysing opponents using video footage.

"It's very crucial. I will see Sundowns again on Sunday in Port Elizabeth against Chippa because Chippa is the next opponent for us and I'll be there at the stadium... if somebody doesn't like it, so what?" Middendorp quipped.

"The [TV] camera is always on certain players and following their direction; and you don't see parts of how the team is following [those players] and getting stretched over the field. With a camera you don't see the entire platform and how a team is having holes or gaps."

Under Middendorp, much work goes into profiling opponents. Not only does the 61-year-old attend as many games as he can but the club also deploys an analyst to capture their own video footage.

Kaizer Chiefs coach Ernst Middendorp exudes a calmer demeanour these days and has seemingly ditched the hot-tempered style that became his hallmark ...
Sport
2 years ago

"From our side we record games from behind the goalkeeper where we have another perspective and not only trust the TV [footage].

"There are different opinions, other coaches don't like to go to the stadium but I like to see a game live."

Chiefs will take on Orlando Pirates in the last eight of the Telkom Knockout in Durban on Saturday.

As can be expected, the Chiefs coach watched Pirates' controversial 1-0 win over Highlands Park at Makhulong Stadium on Tuesday night.

The Chiefs technical team will use this intelligence to overcome their Soweto rivals.

Bloemfontein Celtic played to a 1-all draw against SuperSport United in a PSL match at Dr Molemela Stadium in Bloemfontein last night.