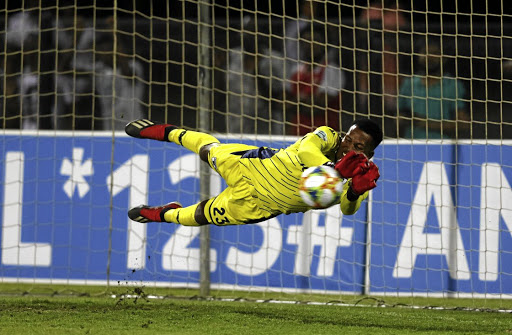 Ricardo Goss of Bidvest Wits has been selected in the Bafana Bafana squad for Afcon fixtures against Ghana and Sudan.
Image: Anesh Debiky / Gallo Images

Bidvest Wits goalkeeper Ricardo Goss has been "stunned" by his second Bafana Bafana call-up, just 14 months after moving up from the second tier.

The last few months have been remarkable for Goss, who joined Wits from Real Kings in August last year. The lad from Chesterville, Durban, claimed the Wits No.1 jersey towards the end of last season, when then first choice keeper Darren Keet was frozen out.

Having received his maiden senior national team call-up for the Nelson Mandela Challenge clash against Mali three weeks ago, Goss was again included in the Bafana squad for back-to-back 2021 Africa Cup of Nations (Afcon) qualifiers against Ghana and Sudan on November 14 and 17 respectively.

"I am stunned," Goss said, when asked for his reaction to the call-up. "It's been really a very good few months for me. I didn't expect things to happen this fast for me.

"Just two seasons ago, I was playing in the NFD (National First Division, now known as GladAfrica Championship). I am a strong believer in God, it's His grace, He's showing off His work through me and I am privileged for that."

Goss came through Golden Arrows youth ranks, but played only four games for the Abafana Bes'thende between 2013 and 2017 when he switched to Kings.

"I am up for the challenge... They are more experienced than me and I am learning from them."

The biggest regret in life is that he never knew his father.

"... he never showed up. But I never really felt that pain because my mom did everything for me. I'm mama's boy."

Bafana Bafana coach Molefi Ntseki says his team will not take a step backwards‚ promising a front foot‚ attacking approach when they meet Mali in the ...
Sport
2 years ago

Mothobi Mvala called up to Bafana after Bongani Zungu withdraws

Highlands Park central midfielder Mothobi Mvala has been called up as a late replacement as Bafana Bafana star Bongani Zungu had to withdraw from the ...
Sport
2 years ago
Next Article