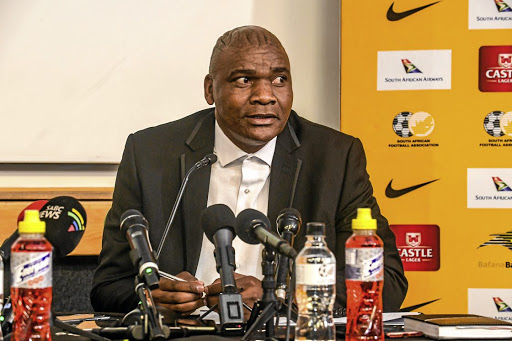 In his usual subtle and calm style, Bafana Bafana coach Molefi Ntseki made an indirect plea to Safa to hire permanent support staff to help him do his job.

Currently, Ntseki is a one-man show at Bafana as he has no technical team. It has been three months now and the association has still not given him a team. The 50-year-old is finding it particularly hard to analyse potential players for the national team and to scout opponents.

Arthur Zwane and Trott Moloto can only step in when it's international week as they have obligations at Kaizer Chiefs and Mamelodi Sundowns respectively.

Yesterday, after announcing his 25-man squad to face Ghana and Sudan in back-to- back Africa Cup of Nations (Afcon) qualifiers next month, Ntseki made a non-confrontational appeal to his bosses.

"As of now we don't know much about those players doing well at their clubs because I can't be all over to see them," Ntseki said.

"Over the weekend I managed to cover three matches but there were other matches I couldn't attend to. If we had a scouting team it would help. We'll be able to cover all the matches ... whether locally or overseas."

Bafana Bafana coach Molefi Ntseki has been a busy man.
Sport
2 years ago

Since taking over as coach, Ntseki has had the odds stacked against him. His first scheduled game was cancelled due to xenophobia. His team was plagued by injuries in the Nelson Mandela Challenge match against Mali. Now he'll only have two training days to prepare for the Ghana match in Accra on November 14 and one day for the follow-up game against Sudan at the Orlando Stadium on that Sunday.

"We want to leave for Ghana on Monday [November 11] and have a regeneration session in the afternoon.

"On Tuesday we will have a video session and go for training in the afternoon. On Wednesday it will be match-day minus one at the stadium and then we play on Thursday," Ntseki said. "We will then fly back to play Sudan."

Safa acting chief executive Russell Paul said there was no attempt to request the Premier Soccer League to postpone games. "Playing two games in three days is no different from anywhere else. It's normal to play a home game on Saturday and an away game on Tuesday," he said.