Tau cherishes life at the top 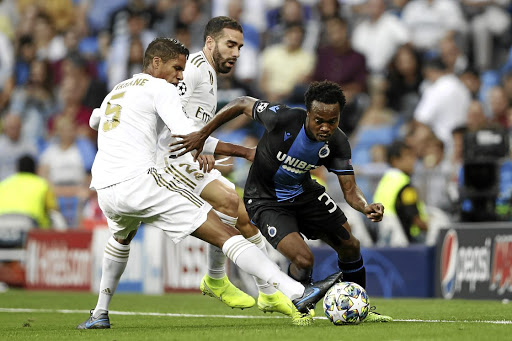 From his fans bombarding Club Brugge's Twitter account, to him delivering an outstanding performance at the Santiago Bernabeu, Percy Tau is truly living the dream.

The past three months have been a whirlwind of excitement for the 25-year-old from Emalahleni since arriving at the Belgian Pro League side.

He has staked his claim among the world's most elite footballers playing in the Uefa Champions League.

"It was a great moment and I will cherish it forever. It's an incredible feeling playing in the Champions League against the best players in the world," said Tau of his recent appearance in Brugge's 2-2 draw against Real.

"I used to dream about the day I'd be playing in the Champions League and now I have achieved it," he said.

His legion of supporters have caused his club's following on Twitter to spike by thousands. Without fail, every time the club tweets, Tau's fans pester Brugge's media team to post Tau instead.

"It's good humour and good fun," he laughed. "No, it does not embarrass me. I appreciate the love and support.

"I'm grateful and it's good to know that people are behind me. It's great that people see the hard work that I put in."

Bafana Bafana gave new coach Molefi Ntseki the perfect start to his tenure by beating Mali 2-1 in the Nelson Mandela Challenge at NMB Stadium in Port ...
Sport
2 years ago

The goal poacher picked up an injury while playing for his club last week against Gent that forced him to miss Bafana's 2-1 win over Mali in Port Elizabeth on Sunday.

Tau intends to do everything possible to shrug off the
tendon injury in time for their Group A home match against Neymar's PSG next Tuesday.

"I'm am still feeling some pain, but I'll be going for a scan to see what's wrong. Hopefully I can be back soon to help my team in our coming games."

Back to the national team, Tau missed coach Molefi
Ntseki's first game, but remains an integral part of the team. He has backed Ntseki as the new man in charge of the team.

"He is a great coach which is why he was given the position. Everyone is trying to understand the way he wants us to play," he said.

"We understand him more because he has been around with us. The only difference is that he is the head coach."