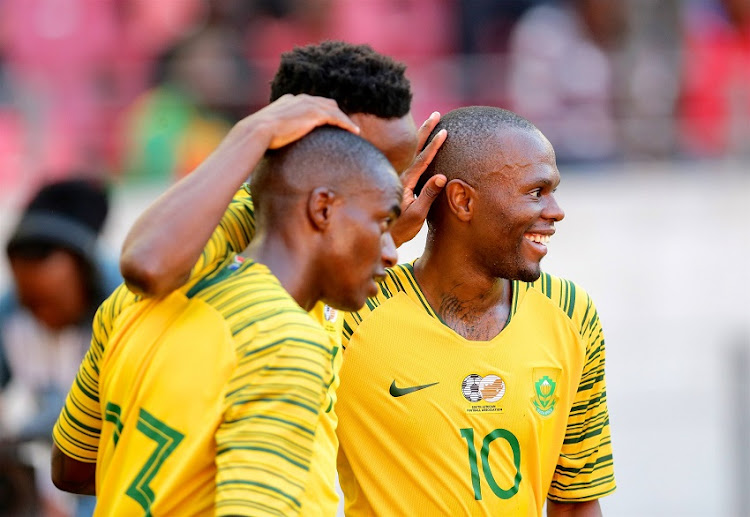 Bafana Bafana gave new coach Molefi Ntseki the perfect start to his tenure by beating Mali 2-1 in the Nelson Mandela Challenge at NMB Stadium in Port Elizabeth on Sunday.

Bay soccer fans braved the chilly weather in support of their national team they had last seen live in action in 2011 against Ivory Coast.

And they were well rewarded.

A Dean Furman penalty and a well-taken goal from Themba Zwane enabled Ntseki's charges to beat their West African opponents in the tough encounter.

Mali's lone striker Sekou Koita ensured a tense final passage of play when he skipped past SA's defence to pull one back for the visitors in the 75th minute.

Bafana were happy to emerge victorious against‚ albeit in a friendly‚ as their first meeting with Mali resulted in a 2-0 quarterfinal loss at the 2002 Africa Cup of Nations.

They would suffer another defeat to the West Africans at the same Afcon stage in 2013‚ with Mali claiming a penalty victory following a 1-1 draw.

Thank you for the amazing support PE. The atmosphere was electrifying.

Remember that you can still make your contributions to the @NMCF_SA by SMSing Mandela Challenge to 38652 for a small R10 donation. #MandelaChallenge pic.twitter.com/znFSt6jzNq

There was a 3-0 victory for SA in a warm-up match in Libreville before the 2015 Africa Cup of Nations‚ but there was no trophy on the line then.

On Sunday there was silverware on offer and it was Ntseki's troops who got to hold it aloft thanks to a decent enough performance from the national side.

The national team have been struggling for game time after Zambia and Madagascar pulled out of scheduled friendlies due to xenophobic attacks in Johannesburg.

Sundays game was Molife Ntseki’s first official match as the Bafana coach following his appointed in August taking over from Stuart Baxter.

Both teams started off like a house on fire in the first half looking for an early breakthrough.

Mali had the first shot on goal when Hadi Sacko’s hit a powerful strike from just outside the box eight minutes into the game but his attempt went straight into the hands of Bafana goalkeeper Ronwen Williams.

A little while later‚ Mali's defence was tested by Bradley Grobler but he shot wide. Bafana’s eventually got on the scorecard through a penalty after Thulani Serrero was brought down inside the box.

Furman sent the goalkeeper the wrong way to put Bafana in the lead 22 minutes into the game. The West Africa side fought hard to level matters but their attempts were fruitless. Super sub Zwane‚ who replaced injured Keagan Dolly‚ scored the second goal for Bafana after he received a pass from Thembinkosi Lorch.

Zwane placed it beautifully into the net having only been on the field for minutes. Bafana went into the break leading 2-0 and they picked up from where they left off in the second half.

However‚ the Eagles did not take the attack lying down as they too turned up the heat. Mali finally found the back of the net after Koita fought his way through the Bafana defence to beat goalkeeper Darren Keet‚ who had replaced Williams.

Bafana played without forwards Lebo Mothiba and Percy Tau after team doctor Thulani Ngwenya had on Thursday confirmed that the later was available for selection. Before the match Safa sent out a statement ruling both players out of the clash.

“This has been one of the most difficult camps ever in terms of injuries and while we have done the best we can to get all the players ready for this important match‚ it is unfortunate that Lebo and Percy failed a late fitness test and thus cannot be part of the match day squad‚" the statement said.