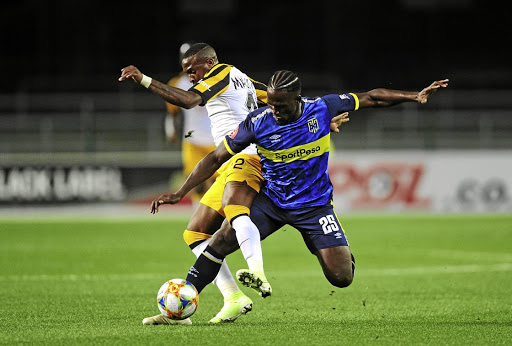 In the guise of his nickname "Shaka Zulu", Cape Town City striker Siphelele Mthembu sees their first-round Telkom Knockout clash against Kaizer as a war.

Mthembu, 32, earned his sobriquet through his sturdy physique and dark complexion that drew comparisons with the warrior Zulu king, who was synonymous with war.

"The match against Chiefs is going to be a tight affair, it will be war. But I think playing at home will help us," Mthembu said on the sidelines of the TKO draw at the SuperSport studios in Randburg on Wednesday.

By likening this upcoming match to a war, you get a sense that Mthembu has a grudge against Chiefs, his home for three years until he was released for misfiring in August 2017. However, the City striker maintained he has nothing against the Soweto giants.

"Yes, I was at Chiefs. I played my part when I was there. I don't hate Chiefs and I have nothing to prove. They treated me well when I was there. I said it'll be war because of our poor form of late, we want to turn things around," said Mthembu, who netted just twice in 43 games in Chiefs colours.

The lad from Melmoth in KwaZulu-Natal started last season like a house on fire, but his form declined midway through as he remained stagnant on six goals for City.

Among other things, Mthembu attributes the sudden downturn in form to the departure of Ayanda Patosi, who left City for Iranian outfit Esteghlal in January.

Cape Town City striker Siphelele Mthembu is enjoying the best scoring season of his career but coach Benni McCarthy says there is more to come and ...
Sport
2 years ago
Next Article