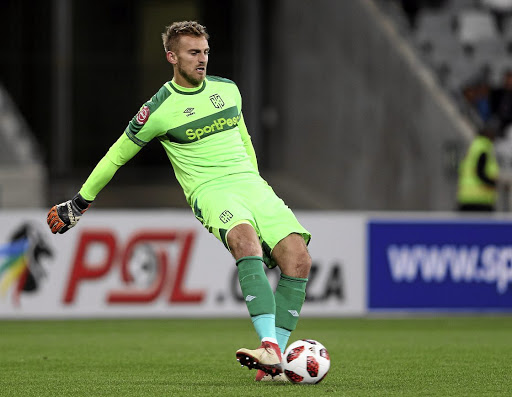 Talk about rubbing salt in the wound!

Cape Town City coach Benni McCarthy looked to have taken a slight swipe at embattled Kaizer Chiefs goalkeeper Virgil Vries when he praised his shot-stopper Peter Leeuwenburgh for his heroics against Amakhosi.

McCarthy recorded his maiden win over Chiefs on Wednesday. It was Edmilson Dove's solitary striker that sealed the deal for the Capetonians. The Mozambican capitalised on Vries's horrendous error. Leeuwenburgh produced a number of top-drawer saves in the first half.

"They [Chiefs] really let us off the hook. At half time they could have been easily 3-0 up, but yeah, that's what happens when you got one of the best goalkeepers in the league," said McCarthy.

"You bring goalkeepers that can keep you in games such as this. Thanks to our goalkeeper he kept us in it."

McCarthy was unimpressed by Chiefs defender Teenage Hadebe's failure to check on his striker Siphelele Mthembu after his tackle that forced the City top-scorer out inside the first 10 minutes of the game.

"We have to assess Shaka's [Mthembu] injury, but I know Shaka is one of the toughest players in the league. He does not go down so easily. I won't say it was a malicious tackle from Hadebe. we won the ball cleanly but then that's where it ends," noted City coach.

"You need to follow through and take a player out because it might be a career-threatening injury, that's the part I do not agree with, when players make those kind of tackles."

Mthembu has already netted seven league goals. McCarthy is optimistic his marksman can win the Golden Boot, hoping his injury is not a serious one.

"I just hope, for Shaka's sake, that he's not out that long again because I think he has an opportunity - looking at the kind of football that we play, to get the top goal scorer award," said McCarthy of Mthembu, who's one goal behind current top-scorer Mwape Musonda of Black Leopards.