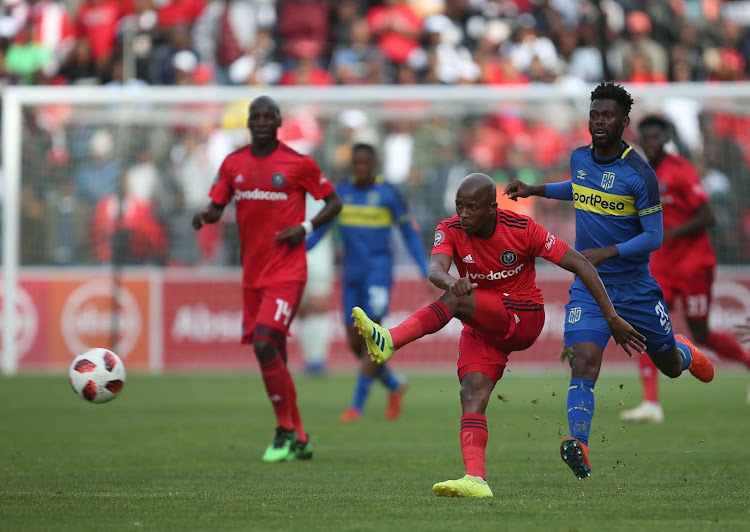 Luvuyo Memela during the Absa Premiership 2018/19 game between Cape Town City and Orlando Pirates at Athlone Stadium in Cape Town on 4 May 2019.
Image: © Bertram Malgas/BackpagePix

The Buccaneers are now just a single point ahead of second-placed Mamelodi Sundowns, but have played a game more and could see The Brazilians take over in top spot before the final round of matches next weekend, taking the championship out of their hands.

Pirates fell behind to a Zukile Kewuti goal after only 18 seconds, but within 15 minutes they were on level terms after an equaliser from Thembinkosi Lorch, and early in the second period grabbed their precious winner through Luvuyo Memela.

But Martin broke the hearts of The Ghost with the equaliser in a magnificent atmosphere as tens of thousands of expectant Pirates fans filled the stands.

Pirates coach Milutin Sredojevic went with the same starting XI that did duty in the 1-0 away victory over Maritzburg United 10 days previously.

After a season of tinkering, he has seemingly settled on what he feels is his best side, which did not include midfielder Xola Mlambo, who started from the bench.

City were again without suspended striker Kermit Erasmus, who surely would have relished facing his former employers, but restored left-back Edmilson Dove, winger Gift Links and playmaker Chris David to the starting XI. Former Buccaneer Teko Modise had to settle for a place on the bench.

The match kicked off 15 minutes late as fans streamed into the stadium, but when it did, Pirates made the worst possible start.

Thembinkosi Lorch had an opportunity to equalise shortly afterwards, but his chip over home goalkeeper Peter Leeuwenburgh cleared the crossbar. Justin Shonga was the next to shoot wide in a frantic start to the game.

Pirates pressed hard for the equaliser and it arrived on 15 minutes, Lorch slipped into space in the box and he provided a neat finish past an exposed Leeuwenburgh.

The big Dutch goalkeeper had to be alert midway through the first half when Vincent Pule lashed a shot goalwards, but was pushed over the bar by the gloveman as Pirates continued to look the most enterprising of the two teams.

Kewuti should have grabbed a second though when he rose to meet Thami Mkhize’s cross from the right, but put his effort the wrong side of the post.

The first half ended with the scores level, but Pirates unable to turn their ball possession superiority into goals.

Mthembu had an effort go wide early in the second period after being cleverly played in by David, but it was Pirates who hit the front on 50 minutes.

A mistake from Cupido gave Lorch a clear run on goal, and while Leeuwenburgh did well to block his initial effort, and the subsequent shot was blocked by a defender, Memela showed composure to blast the ball home at the third attempt.

City thought they had the equaliser when David finished in the corner, but the goal was ruled out for offside by referee Khulekani Thusi and his assistant Shaun Olive.

Pirates midfielder Ben Motshwari blasted wide from a good position, and the visitors were made to pay for their profligacy when Martin turned the ball home late on, much to the delight of the City bench and their coach, former Pirates striker Benni McCarthy.