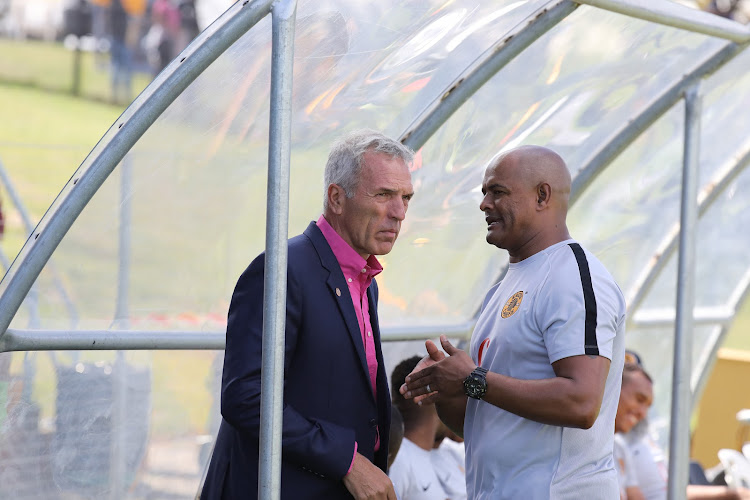 Coach Ernst Middendorp and his assistant Shaun Bartlett of Kaizer Chiefs during the 2019 Nedbank Cup match between Tornado and Kaizer Chiefs at the Sisa Dukashe Stadium,Mdantsane on the 27 January 2019.
Image: ©BackpagePix

Ernst Middendorp warns his Kaizer Chiefs side “will have to be at our best” if they are to overcome the threat of Cape Town City in their Premier Soccer League encounter at FNB Stadium on Wednesday.

The match has been hastily brought forward from the weekend‚ due to Chiefs’ exit from the Caf Confederation Cup to Zambia’s Zesco United‚ and no longer having continental fixtures to honour.

“They [City] have a very clear structure about them. They are very capable on the quick transition‚ with quick players and they are very good with clever patterns of play‚” Middendorp said.

Amakhosi’s head coach spent his Saturday night in the stands at the Cape Town Stadium‚ spying on Benni McCarthy’s side when they beat SuperSport United 2-0 in the first round of the Nedbank Cup.

The Chiefs coach then caught a 6.15am flight to East London the next morning to take charge of his Kaizer Chiefs side in their cup tie against amateur Tornado FC‚ which Chiefs won 1-0 in extra-time thanks to Abongile Twani’s own goal.

But that did not put Middendorp off his mission.

“I don’t think it is so much about the individual players. That’s not so relevant. It is more about their general way of playing – how they do their buildup‚ their movements‚ how they use the deeper hole in the midfield‚” he said.

“For me it was important to see how they structure their game.

“But let’s wait and see. We have to worry about ourselves first and see which fresh players we can bring in after our cup game on Sunday.”

Middendorp did not take Khama Billiat‚ Mario Booysen or George Maluleka to East London‚ but all three could be back on the pitch on Wednesday.