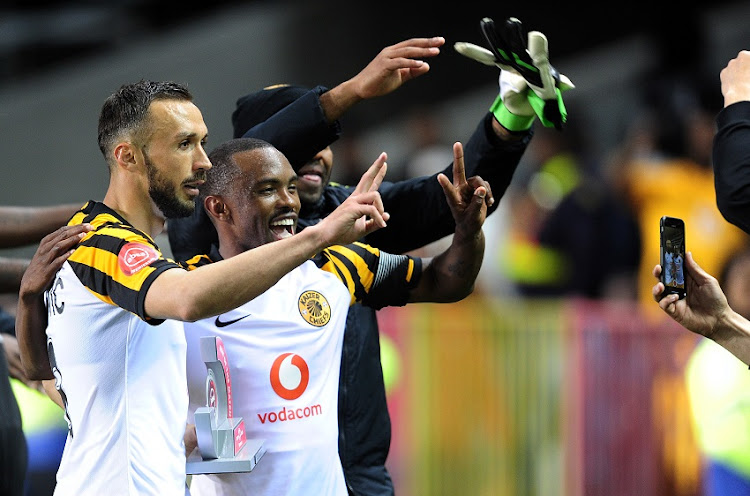 Samir Nurkovic and Bernard Parker of Kaizer Chiefs pose for a selfie after the Absa Premiership 2019/20 game between Cape Town City and Kaizer Chiefs at Newlands Stadium in Cape Town on 27 August 2019.
Image: © Ryan Wilkisky/BackpagePix

New Kaizer Chiefs striker Samir Nurkovic is reluctant set targets and predict the number of goals he could score for AmaKhosi in his maiden season in the domestic premiership.

While reluctant to put his head on the block‚ the 1.87m tall striker has assured fans that he intends to play a key role upfront as Amakhosi continue to plot a path back to the winners’ podium after four barren years.

Nurkovic wants to be part of a Chiefs team that hoists aloft a trophy for the first time since May 2015 and put a gloss on the club’s 50th anniversary celebrations.

“I just want to do my best in each and every game and do what the coach is asking of me‚ then the goals will come‚” said Nurkovic at the club’s training base in Naturena.

The 27-year-old Serbian striker has adapted well to new life and surroundings at Naturena.

He has featured in all of Amakhosi’s four games this season and the busy striker has already opened his account after scoring a wonder goal in Chiefs 1-1 draw against SuperSport United last month.

“As a striker my job is to score goals and I hope I can score as many goals as I can. Everybody knows I know how to do it‚” said the striker.

He took a prolonged deep breath before saying that “as long as I am creating chances for my teammates and I am playing I am okay.”

Chiefs next game is against a Polokwane side high on confidence having conceded just one goal in four league matches.

The visitors are placed fifth on the standings‚ three points behind Chiefs with two wins‚ a draw and a defeat.

“We respect every opponent and if we are going to play like we played in our first four games‚ it is not going to be a problem at all‚” said Nurkovic.

Nurkovic added that he understands that as a striker there will be a weight of expectation on him to score goals.

He insisted that he is up for the challenges that lie ahead.

“This is the club with the richest history in this country and of course every year this club deserves to win something.

“For me personally I just focus on the next game and just try help the team collect as many points as we can‚” said Nurkovic.

It is the first time that Nurkovic sets foot on African soil having played in the lower leagues in Slovakia last season.

He said he is enjoying every moment since his arrival in South Africa in July.

“(The PSL) is a quality league with a lot of quality players and so far I am enjoying it. It’s first time I play in front of these wonderful supporters.

“We have the best supporters in Africa and I am enjoying every moment.”

Leaders Chiefs are perched at the premiership summit after four matches with 10 points and are yet to be defeated with three wins and a draw.