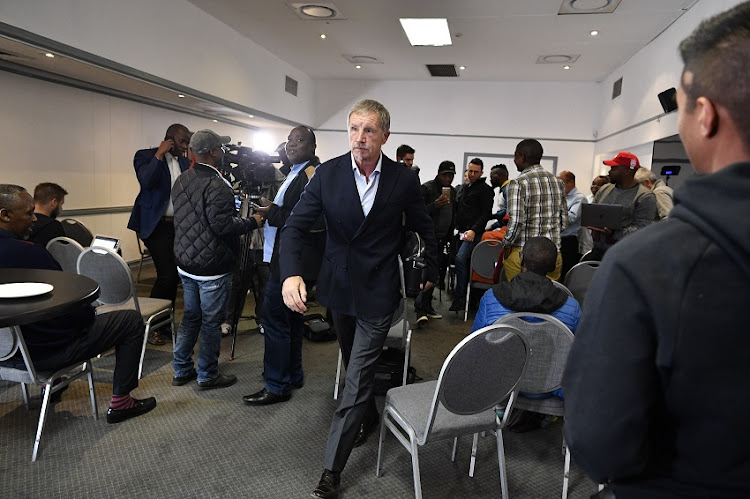 Stuart Baxter has reacted angrily to a suggestion made by former national boss Jomo Sono that the recently-departed Bafana Bafana coach was influenced by agents in squad selections‚ specifically for the Africa Cup of Nations.

Jomo Cosmos owner and SA football legend Sono was making a seemingly valid point that the next Bafana coach needs to be “someone strong”‚ and who will not easily succumb to an apparent long-standing problem of national coaches falling under the influence of agents.

The facts‚ however‚ do not seem to support Sono’s allegation‚ which he admitted to making “from afar”‚ that “one agent maybe had six or seven players” in the Egypt 2019 squad.

As far as SowetanLIVE has managed to establish‚ no single agent had more than three players represented in the Bafana squad.

The 23-man squad – with a few whose agents could not be established – apparently were represented by at least 18 separate intermediaries.

Baxter‚ contacted as he was packing his bags for his flight on Wednesday night for his return to his family home in Sweden‚ labeled Sono’s suggestion “nonsense”.

“I can tell him that if there is one coach over the last 20 years who has not done what he says‚ it’s me.”

Sono was asked about who the next Bafana coach should be after Baxter resigned from his five-year contract on August 2.

“To be honest‚ I never watch Bafana‚" Sono said.

"Because‚ in my own opinion‚ we need a coach who will select the players not by what he is told‚ and by whom he is told.

“That’s the impression I have when I look from afar‚ from a distance.

"That most of the players who are in there are from a bunch of one agent. One agent maybe has got six or seven players in there.

“I had that problem [of agents trying to influence]. I’m talking from experience. And‚ because I’m crazy‚ they never got close to me.

“That’s the impression I got. With due respect‚ some of the players‚ talking about Bafana Bafana‚ didn’t really deserve to be there [at Egypt 2019] wearing the jersey.

“I can quote two‚ but I don’t want to because they are professionals. I’m also a professional coach. If I mention their names‚ I’m destroying their professional careers.

“But two players there‚ I don’t know how they got there. But that is Mr Baxter’s selection.”

Sono‚ asked who he thinks should be the leading candidates to be the next Bafana coach‚ then also said the alleged problem runs down to the junior teams.

“You need a ‘not-a-coach’. You need a strong person. Because the problem is not the coach‚” he said.

“The problem is the agent. ‘Play my player – he must get a cap and then we can sell him’. That’s what is happening in football now.

“You can go to the junior national teams. We in the GladAfrica Championship [First Division] are forced to play under-23 players. They are never selected.

Sono’s Cosmos open their campaign in the newly-named GladAfrica Championship in the televised match-up against TS Galaxy at Kameelrivier Stadium on Sunday (kickoff 1pm).