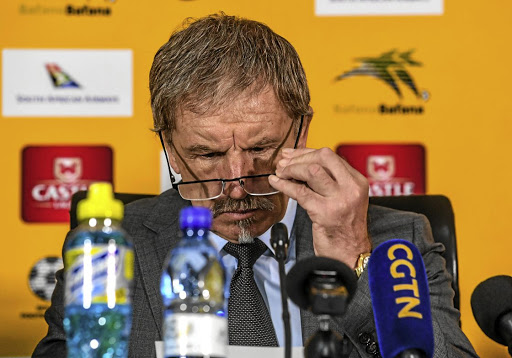 Former Bafana Bafana coach Stuart Baxter has expressed displeasure after his post-tournament report from the Africa Cup of Nations (Afcon) was leaked.

A report in one of the Sunday newspapers detailed Baxter's feedback report from the tournament which was critical of his ex-employers, the SA Football Association (Safa).

Baxter's frustration led to him tendering his resignation as Bafana coach a fortnight ago. The 60-year-old admitted his disappointment with the "confidential" report, which he was obliged to write after the Afcon, being leaked to the media.

"To have a situation where an employer releases a report that is confidential is very disappointing to say the least. These kind of things shouldn't happen," Baxter told Sowetan in a brief chat yesterday.

"There are many things in South Africa that are very unique and in the bigger scheme are holding the country back and when you address those things then you get attacked."

After every tournament, Safa's technical committee requires the Bafana coach to provide a report of the competition.

Baxter said he would be leaving the country today to spend some time back home with his family in the United Kingdom.

In the report, the Brit laments the organisation for various reasons, including failure to secure a friendly in SA before the Afcon, shambolic booking arrangements, team suits that did not fit and a lack of support generally from the organisation.

In addition, Baxter also lambasts the instance that the team be addressed by the minister of sport before a crucial game.

Although Bafana made it to the quarterfinals of the continental tournament in Egypt, some of the team's performances were still seen as unconvincing.

A process is already underway to find a new mentor to take over the Bafana hotseat.

All indications suggest that a local coach will be appointed, considering the dire financial position of the country football governing body.

Safa acting chief executive Russell Paul could not be reached for comment to explain how the document was leaked.