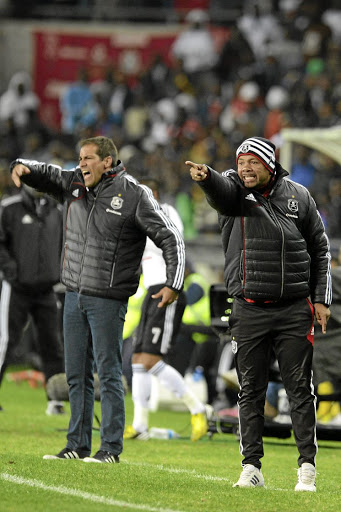 SA Football Association (Safa) is on a lookout for a new coach after the resignation of Stuart Baxter a fortnight ago.

It's believed that Safa's hierarchy is favouring a local coach, with Mamelodi Sundowns' Pitso Mosimane, Steve Komphela of Golden Arrows, Gavin Hunt of Bidvest Wits and Cape Town City's Benni McCarthy among the names that have been suggested.

However, Moloi, a former Pirates assistant coach and Chippa United head coach, has a strong view that De Sa also deserves a chance to lead Bafana.

"I see you guys are throwing names in, like Pitso, Gavin Hunt and Steve Komphela, but you are not throwing in Roger de Sa's name. He should be asked if he'd take a chance if Safa gives him the job," Moloi told Sowetan.

Moloi argued that De Sa boasts an incredible pedigree when it comes to continental football, having led Bucs to the CAF Champions League final which they lost to Al Ahly of Egypt in 2013.

"He's the only coach... I don't know if you guys follow history, when Pirates were campaigning CAF Champions League they were also campaigning in three cup finals here at home, it had never happened.

"It's not easy to play continental football and still play the finals of domestic competitions, but Roger did that.

"Let's not look at these three guys [Komphela, Hunt and Mosimane] only as if Roger didn't achieve anything."

Coach Benni McCarthy says he is “150 million percent” focused on his job with Cape Town City‚ but has left the door open for a discussion around the ...
Sport
2 years ago

The retired Pirates midfielder, who garnered only two Bafana caps in his heyday, thinks even if De Sa isn't given the opportunity to be the coach, he must serve in the technical team of the new coach.

Even in 1996 [when Bafana won the Africa Cup of Nations], Clive Barker wasn't alone... he had Jomo Sono, Eddie Lewis, and a lot of people."