All eyes on the Tshwane derby 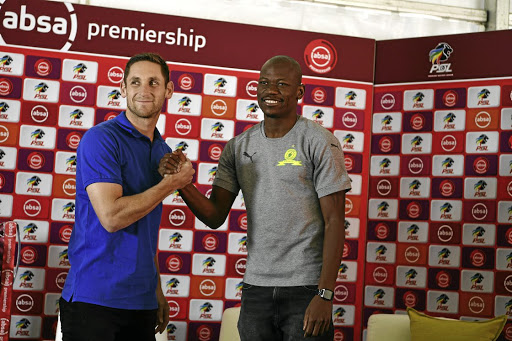 There is a high possibility that Thamsanqa Gabuza will make his SuperSport United debut against Mamelodi Sundowns at Lucas Moripe Stadium tomorrow (3pm).

Having joined SuperSport from Orlando Pirates barely five weeks ago, Gabuza, 32, appears to have already earned the trust of coach Kaitano Tembo at Matsatsantsa.

The SuperSport mentor has dropped a hint that he may alter the team's style of play to accommodate Gabuza, who managed only 11 strikes in 95 Bucs appearances across all tournaments since transferring from Golden Arrows in August 2013.

"In terms of our approach, if you look at last season, especially in the second half of the season, we played with two in the midfield and two upfront,'' said Tembo.

"Probably that's the direction we want to try and take coming into the new season, especially having Gabuza, who is also a strong guy . can play with someone like Bradley [Grobler] or Evans [Rusike].''

SuperSport United captain Dean Furman has challenged emerging midfielder Teboho Mokoena to elevate his game in the coming season and fill the void ...
Sport
2 years ago

Perhaps Gabuza will be SuperSport's secret weapon against Downs, with Sundowns having always dominated the Tshwane derby. Matsatsantsa have only won one of their last six league clashes with the Brazilians.

It can only motivate Tembo's charges that their last victory over their cross-town rivals came in their last meeting in April when they claimed a 2-0 win away at Loftus.

Meanwhile, as they target a record 10th league title by defending their title, Downs are aiming for a perfect start.

Star gets 2 weeks off after five years.
Sport
2 years ago

"The first game of the season is always vital . it sets the tone. This season is about us trying to be as consistent as we can,'' said Kekana.

Matsatsantsa captain Dean Furman feels the dominance of Downs is at threat as teams are slowly closing the gap on the defending champions.

"I think teams are getting closer [to match Downs] . teams are certainly trying to close the gap,'' said Furman.

New PSL season: A rested Sundowns could be even more fearsome

Mamelodi Sundowns are going after a hat-trick of Absa Premiership titles and with their star-studded squad‚ the question is if anybody can stop them.
Sport
2 years ago