No pressure on Mauricio Affonso 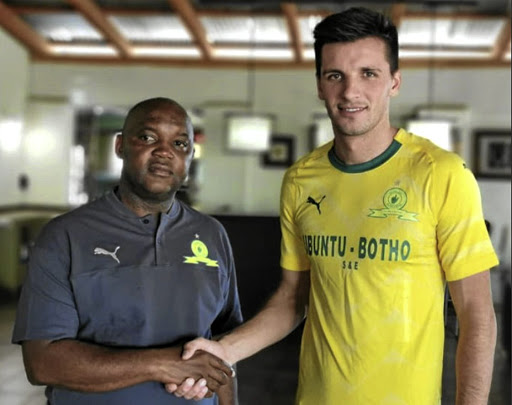 New Mamelodi Sundowns striker Mauricio Affonso has not set himself any unrealistic target at the club after signing on the dotted line this week.

The defending Absa Premiership champions have bolstered their squad with two additions so far - Affonso and Nyiko Mobbie.

The ever-increasing South American influence has continued at the club where they already had Ricardo Nascimento (Brazil), Emiliano Tade (Argentina), Gaston Sirino and Affonso (both Uruguayan).

"It feels good to be here at the club. Sundowns is a big club and I have been well received by the players and coaching staff," Affonso said.

"I have come here to contribute to the team as a striker, I wanted something different and this club gives me a good challenge."

Pitso Mosimane to new Uruguayan striker: 'We won’t change our style of play'

Mamelodi Sundowns coach Pitso Mosimane says if new Uruguayan striker Mauricio Affonso adapts quickly to their passing style of play‚ he will be a ...
Sport
2 years ago

When quizzed about his goals target for the season he said: "I can't say the number of goals I will score. I just want to help the team and contribute. My job is to score, but the point is to help the team."

He scored four goals in 11 Liga 1 Apertura appearances for his previous team.

The 27-year-old, who was signed from Club Alianza Lima in Peru, admits that he did not know much about Sundowns.

"I was informed by my club about the interest in me and the possibility of coming to South Africa," he said.

"I didn't know much about the club, but I made sure I found out as much information as I could about the club when I heard they were interested in me."

"It's not easy to get a striker from South America, because you have to scout, judge and make a decision and you never know whether the decision was the right one.

"We don't have a player of his style and ability. We believe he is more important for us for the Champions League.

"The whole thing is to see if the style he plays will fit with our style."

Returning George Lebese told to look for another team

George Lebese is the biggest absentee at the Mamelodi Sundowns training camp currently taking place in Mbombela, Mpumalanga.
Sport
2 years ago
Next Article