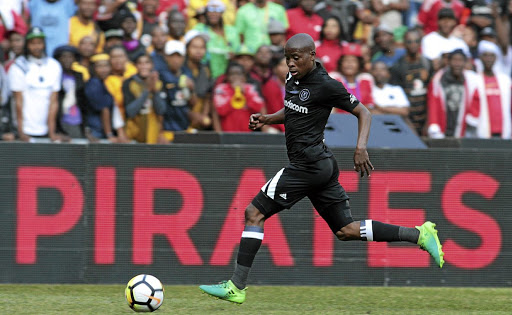 Black Leopards have added yet another big name to their squad after signing former Orlando Pirates wing-back Thabo Matlaba.

Leopards continued their spending spree with the acquisition of Matlaba after the club had secured the signatures of Thuso Phala and Mogakolodi Ngele last week.

Matlaba had recently become a free agent after having spent seven years with the Buccaneers.

Leopards boss David Thidiela told Sowetan yesterday that Matlaba would be a great influence in the team.

"Thabo will add value because I have a couple of young players. He is someone who is matured and will be able to talk to the other players," Thidiela said. "He is experienced and has played for Bafana Bafana and has played in finals of CAF [the Champions League and Confederation Cup]."

Matlaba, among the big earners at Pirates, left the club after declining a request to take a pay cut. Thidiela would not be drawn in on the question of whether Matlaba would command a similar pay package.

"I am not going to talk about salaries now. In any business you must invest but it does not mean the young boys are not paid well, it's about what these players add."

Matlaba's agent Abbie Rasimpi admitted that the offer from Lidoda Duvha was one his client couldn't refuse.

"Yes, it was a good offer. If Thabo is happy with what they put on the table then that tells everyone that it was good," he said.

"There were a number of clubs we were talking to but in the end Leopards are the ones we were able to come to an agreement with."

The club from Venda beat a host of top-flight clubs, including Highlands Park, Bidvest Wits and Maritzburg United, to the player.

Rasimpi continued: "It's a three-year deal. It's a good move for him... I think it's a good fit for Thabo because they both need each other. Thabo's experience will help Leopards greatly and he also wants to play football."