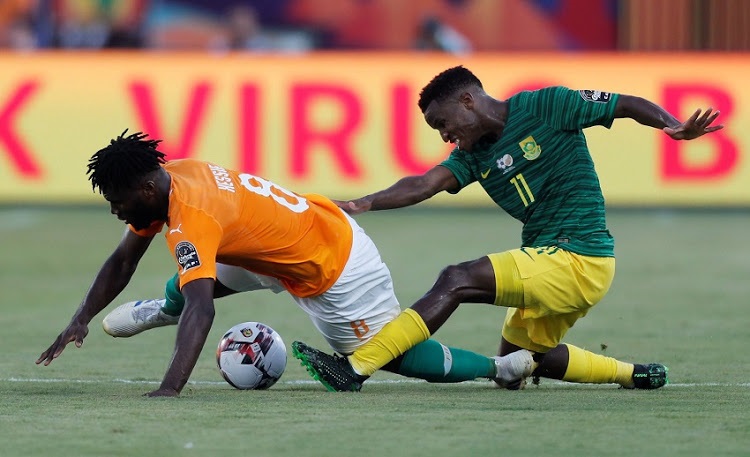 Bafana Bafana coach Stuart Baxter made every effort to pay respect to the qualities of his team's opponents Namibia ahead of what he admitted was SA's must-win African Cup of Nations (Afcon) Group D match-up tonight (kickoff 10pm) at Cairo's Al Salam Stadium.

Baxter was clearly peeved at having to put his own players in a bubble to try to protect them from some of the public backlash in SA to Bafana having lost their opening game 1-0 against Ivory Coast at the same venue on Monday.

There were positives from the game. Baxter, though, was having none of the suggestion that, get his attack functioning, and Bafana should dismantle Namibia.

"I think I can understand when you say the atmosphere back home is negative, because when I came into the job two years ago it was negative," Bafana Bafana coach said.

Baxter looks on brighter side

"And it's been negative all the way through. Even though the Ivory Coast game is the first we have lost in one-and-a-half years, still it was negative.

"And still people are talking that now we will dismantle Namibia, which is totally disrespectful towards a team who have qualified for Afcon and ran Morocco very close.

"So, yes, there were positives to take out of the game against Ivory Coast - 100 percent.

"I think we need to get a touch of reality. That was a top class [Ivory Coast] team we were playing.

Mannetti, who parked the bus against Morocco, has made it an open secret he views Bafana as the team for Namibia to beat in Group D to achieve their aim of a first Nations Cup victory in the Warriors' third finals.

WATCH: Vilakazi reckons Bafana can go on to win the Africa Cup of Nations

Bafana Bafana forward Sibusiso Vilakazi reckons that the team can go on to win the Africa Cup of Nations once they get past the group stage.
Sport
2 years ago

Bafana not as bad as many believe‚ says Delron Buckley

Delron Buckley believes Bafana Bafana's performance against Ivory Coast was not as bad as many have made out‚ but wants the team to show more ...
Sport
2 years ago
Next Article