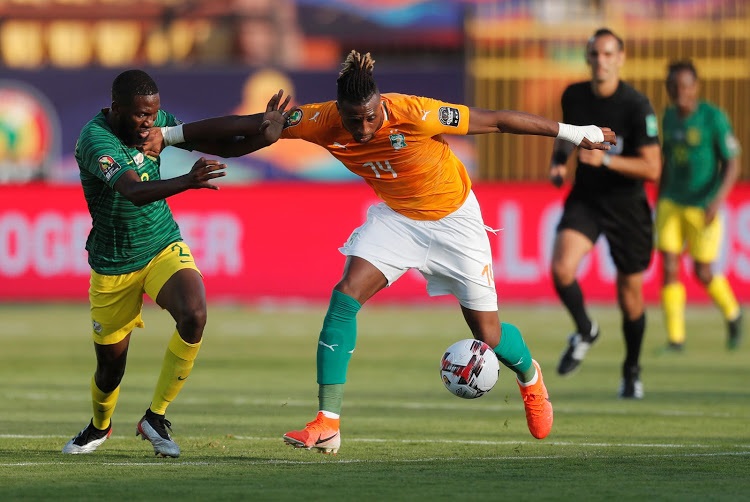 It wasn't the result we were hoping for in our opening Africa Cup of Nations match against Ivory Coast, but Bafana Bafana gave it their all and the game could have gone either way.

But some lapse of concentration at the back allowed Jonathan Kodjia to score in the 65th minute to send the 30,000-seater Al-Salam Stadium into raptures.

Credit, however, should go to goalkeeper Ronwen Williams who made a number of stupendous saves to deny the Elephants.

Bafana went into the match as SA was still reeling from the Proteas elimination from the cricket World Cup on Sunday with a 49-run defeat to Pakistan at Lord's.

We were hopeful that Bafana would lift some gloom hanging over South African sports after distressing weeks after other national teams disappointed at their respective world cups.

But shall we now write off our boys after yesterday's defeat?

Bafana Bafana's inability to get their attack working was the major flaw in their 1-0 Africa Cup of Nations opening defeat against Ivory Coast on ...
Sport
2 years ago

Next for Bafana is a tricky match-up against neighbours Namibia on Friday and this is a match we can ill afford to lose.

The Brave Warriors showed character and nearly stole a point against heavyweights Morocco but lost the match to an own goal by Itamunua Keimuine at the death.

Bafana need to keep their heads up and draw some positives from yesterday's match. Surely, it is not all doom and gloom.

Skipper Thulani Hlatshwayo has made it clear that they know why they are in Egypt. Surely, they are not there for sightseeing, but to try hard to reclaim the Afcon trophy they last won in 1996.

Those are words of encouragement coming from the skipper and we urge all the players to believe in themselves and their abilities.

Granted, Bafana have been disappointing in the previous instalments of the African showpiece, but coach Stuart Baxter has assembled a formidable team to deliver this time around.

Bafana should not listen to the naysers but focus on the job at hand. Let's not criticise for the sake of it. All Bafana need now, are prayers and words of encouragement.

Ivory Coast‚ in their pre-match press conference‚ gave off such an air of nonchalance on their opening Africa Cup of Nations (Afcon) game against ...
Sport
2 years ago

Bafana Bafana were structured and held their own‚ but just too far on the timid side losing 1-0 to the awesome player power of Ivory Coast in their ...
Sport
2 years ago
Next Article