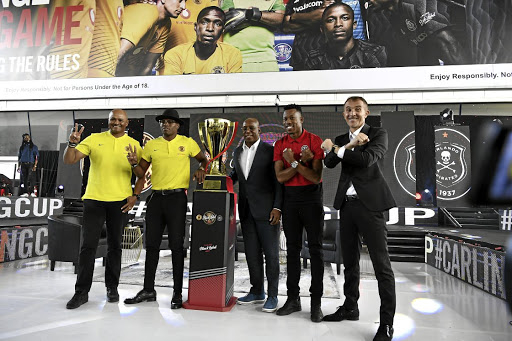 As his contract expires at the end of the impending season, you'd expect Orlando Pirates coach Milutin Sredojevic to be anxious, especially because he's yet to win a trophy.

However, Sredojevic has cut a relaxed figure. Micho, as the Sea Robbers mentor is affectionately known, has given an impression he'll be spoilt for choice in the wake of the expiration of his deal at the Soweto heavyweights.

"I had a problem in 2001 when I came to Africa [to coach for the first time]. Now my name is a brand on the continent, I have served Pirates in the best possible way I could," said Micho, on the sidelines of the media launch of the returning Carling Black Label Cup, at Johannesburg's Park Station, yesterday.

"The moment I go [leaving Pirates], am just one telephone call away from the next job - in national teams [or] big teams on the continent. So it's not somethingto worry about."

Sredojevic has been in charge of the Sea Robbers for two full seasons now without any silverware. They finished as runners-up to Mamelodi Sundowns on both occasions.

Pirates hope to start their preparations for the new term on a high by clinching the Carling Black Label Cup against arch-rivals Kaizer Chiefs at FNB Stadium on July 27.

With mixed emotions between pride at hard work laying a platform and the bitter taste of not winning a trophy‚ Orlando Pirates coach Milutin ...
Sport
2 years ago

"This game is a very important part of our foundation for the upcoming season. We'll respect it by giving it our all," said Sredojevic of the money- spinning pre-season match that was shelved because of the Fifa World Cup last year.

Carling Black Label brand director Grant Pereira urged the supporters of both clubs to grab this "unique" opportunity with both hands to have their voices heard.

"It's a unique opportunity for them to control the teams they love," said Pereira.

Pereira further insisted he doesn't think staging the "Beer Cup" a week after the Afcon finals in Egypt would be a bad timing, although some players would have come bruised or exhausted from the continental show piece.