Mom cries for joy as daughter's killer gets life sentence 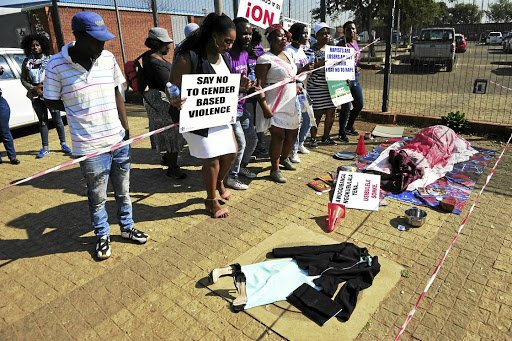 Community members protest against gender-based violence and femicides during the sentencing of Lebohang Mofokeng in Palm Ridge on the East Rand yesterday. /Veli Nhlapo

A 30-year-old man has been handed a life sentence for the murder of a Unisa student and a municipal intern at her commune in the Vaal last year.

Lebohang Mofokeng was sentenced yesterday to life in prison for the murder of his ex-lover Jabulile Nhlapo, 21.

Nhlapo was a human resources intern at Emfuleni municipality and she had just enrolled for a bachelor of education degree with the University of South Africa.

Mofokeng shot Jabulile in the back of her head on May 8 last year. She died on the scene.

The sentences will run concurrently with the life sentence.

Jabulile's mother Adeline Nhlapo, 43, broke down after the sentence, declaring that it is what she had wanted.

"I am crying because I am happy about the sentence that was passed," she said sobbing.

"There are a lot of cases that happened before and they ended nowhere.

"Today the law took its course and I'm happy."

Mofokeng apologised to Nhlapo during mitigation of sentence but the grieving mother would have none of it.

"I will never forgive Lebohang for what he did to my child. I was expecting a lot of things from Jabu but she was unable to realise her dreams.

"There is so much that she wanted to do for herself and her siblings," said the mother of three.

The alleged killer of a Vanderbijlpark student used his father's firearm which had been reported stolen to commit the murder.
News
4 years ago

Handing down judgment, acting judge Herman Broodryk said one of the aggravating factors in the case was that the murder was premeditated.

He said Mofokeng stole his father's firearm with the direct intent to kill Jabulile.

"The two weeks between the theft of the firearm on April 24 and the murder on May 8 was a period of reflection for the accused, yet he decided to continue on his [murderous] path," Broodryk said.

"On the fateful day, he waited for the deceased at work, [and] followed her all the way to her home.

"When he entered her home he was already in possession of the loaded firearm...

"He proceeded to shoot her in the safety and sanctity of her own home.

"What is more aggravating is that he shot her at the back of her head, probably when she was trying to flee," Broodryk said.

"She was defenceless. After the shooting he picks up the bullets [casings] and flees in a taxi as if nothing happened."

Broodryk said other aggravating factors were that Mofokeng did not take the court into his confidence as to what really happened.

"His plea of guilty for culpable homicide instead of a murder charge does not impress me as a sign of contrition and remorse. He took a risk and was burned in the process," he added. "His apology to the [deceased's] mother while giving evidence did not impress me. It was too little too late and did not appear to be genuine."

"My son made a mistake. I expected several years [but not a life sentence] because my child told the truth. I am hurting because she [Jabulile] lived with my child ... Even though my son did this, I expected her [Jabulile's mother] to talk about the good things he did for her," said Phumzile.