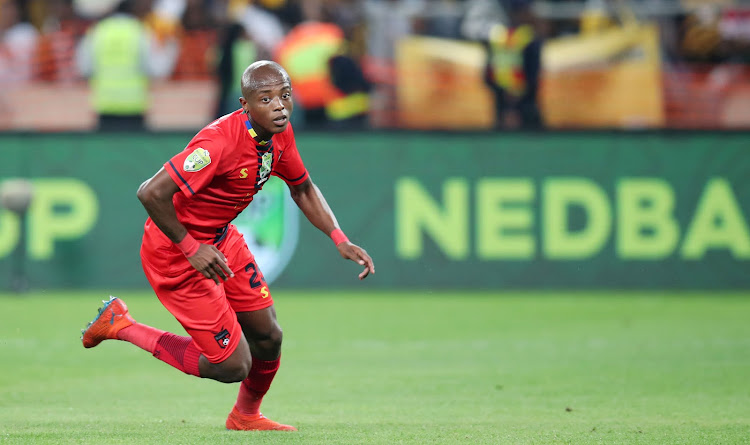 Zakhele Lepasa, who scored the only goal as TS Galaxy beat Kaizer Chiefs to win the 2019 Nedbank Cup, is on loan from Orlando Pirates.
Image: Muzi Ntombela/BackpagePix

TS Galaxy's man of the moment Zakhele Lepasa will wait for Orlando Pirates to decide on his future after a glorious weekend that saw him win a major trophy for his lower tier club and also pip established Kaizer Chiefs stars Khama Billiat and Bernard Parker to a personal award.

Lepasa's lone strike helped his National First Division (NFD) outfit beat Chiefs 1-0 in the Nedbank Cup final in Durban on Saturday night and he returned to exert more pain on Amakhosi on the following day when he won the cup's player of the tournament award at the end of the season Premier Soccer League (PSL) Awards‚ beating Billiat and Parker to the top prize.

“As a player I think I’m good enough to play (at Pirates) but they will be the one to decide‚” said Lepasa.

The 22-year-old Soweto-born striker is on loan at Galaxy from Pirates and his exploits in the final on Saturday and his performances in the competition overall- his last-gasp goal against Chiefs from the penalty spot was his fourth in the tournament - will surely force Pirates coach Milutin Sredojevic to give a chance next season.

Lepasa said he thought that Chiefs‚ the team he's supported from childhood‚ had good chances of winning the game but Amakhosi failed to capitalise on them.

When he scored in the referee’s optional time after Chiefs defender Teenage Hadebe had brought him down inside the box‚ Lepasa thought the game was good as theirs as there was not much time left on the clock.

“The goal means a lot for me and for my family‚ the team‚” he said.

“Like I said during the build up to the game‚ it wasn’t a fluke that we got to the final.

'A lot of people are happy and there will be a lot of changes because of this win. I’m very happy."

The young striker was not happy with starting on the bench as he thought he had done enough to convince coach Dan Malesela he was ready to start.

“I was not surprised‚ I was upset obviously‚ I mean‚" he said.

"Even before this game I was starting but you have to trust him (Malesela). He’s definitely one of the best coaches.

“He was just unlucky not to have won anything.

"So now that he’s won something let’s just hope that it opens doors for more championships for him. Yah‚ you have to trust him.

“It was perfect timing when I came on and I scored in the last minute and it was really hard for them to come back.”

Taking the penalty in a pressure situation with just minutes to go was not that much of a problem for Lepasa as he had done his homework.

“I knew I had to take it because I am always practising at training‚" he said.

"The responsibility is fully mine‚ I knew that I had to take it and make sure I scored.”

Malesela explained that Lepasa needs more time for his game to improve and the decision to start his star player on the bench was deliberate.

“He has potential‚” said Malesela.

“He still has a lot of errors and I need to work on certain areas of the game. But I think he can grow as a player.

“The reason I’m playing him in patches is because I know there are a lot of things he still needs to learn as a striker.

"One of the biggest issues is that he needs to be a team player than more of an individual.

“I have told him that.

"It takes a lot to teach some players (to play as a team) because of all the hype that goes with scoring goals when they're young.

“The player may feel it’s all about Lepasa and you forget your teammates.”