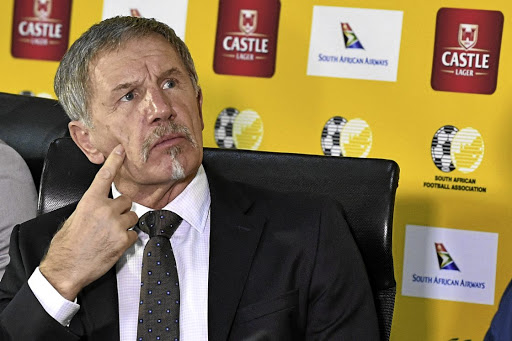 To allay any doubts about his Africa Cup of Nations (Afcon) provisional squad, Bafana Bafana coach Stuart Baxter has attempted to justify the selection of almost every player.

Baxter announced his interim squad of 28 players for Afcon at Safa House yesterday. The team is expected to assemble for camp on June 2. The Brit will trim the squad to 23 before leaving for Egypt on July 12.

"Ben Motshwari. I think he's been consistent. Pirates have played a brand of football that has been very dynamic.

"And in that dynamic approach sometimes you can lose the ball a lot and you go too quickly and there can be a lot of transitions," Baxter said.

"Thembi [Thembinkosi] Lorch has been grabbing all the headlines, but he still needs people like Motshwari who will do the structure bits to allow him to play, so I think that's the important part for me.''

Though he sounded fond of Phiri, Baxter cited the oversupply of midfielders as his reason for snubbing the 24-year-old, who has been in fine form for his French side Guingamp.

"Lebo is in the picture all the time. He's one of the best professionals that we have. He's a fantastic ambassador of our football abroad and he never put his foot wrong. He's always in the mix, but we have some good midfielders - that's the department that we have the most talented players.

"We got Bongani [Zungu], we got the home-based players like Hlompho [Kekana] and Teboho Mokoena. You have [Thulani] Serero, who has come back strongly. Sometimes you cannot get all of them in."

Cape Town City striker Kermit Erasmus and Kaizer Chiefs defender Ramahlwe Mphahlele return to the Bafana set-up after a while. SA is in Group D with Morocco, Ivory Coast and Namibia.