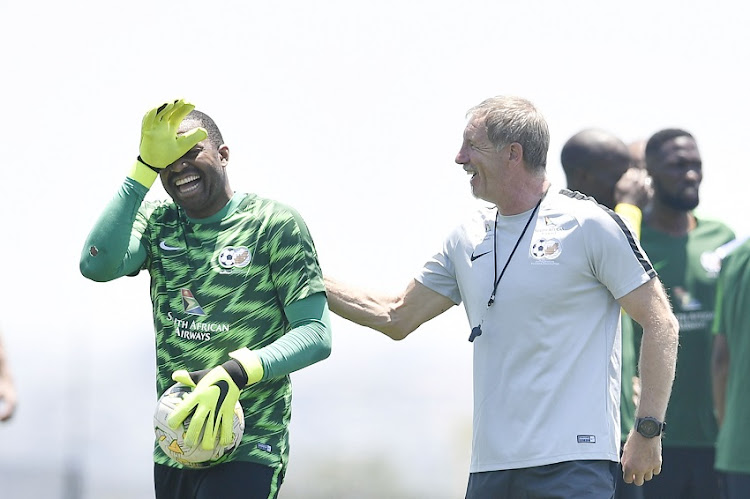 Stuart Baxter decided to leave Itumeleng Khune out of Bafana Bafana's provisional squad for the African Nations Cup after realising that the goalkeeper would not regain fitness in time for the continental showpiece.

Baxter named his provisional 30-man squad on Tuesday and the Briton revealed that the Kaizer Chiefs keeper was simply not fit enough after the troubling shoulder injury he suffered during training with his club in January.

“I’m always keen on Khune because he is good goalkeeper‚” said Baxter.

"But unfortunately if the player is not fit I can’t be too keen on him.”

Baxter had continued to cling to the hope that his No1 keeper would make a speedy recovery towards the end of the season and then play his way back into match fitness in Chiefs' final games of the recently completed campaign.

But it was not to be and even Chiefs coach Ernst Middendorp waded into the debate about Khune's availability for Nations Cup duty when he furiously dismissed hopes of the player playing a role at club level in the last few weeks of the season.

“I can answer you quick. The season is finished for Itu Khune. That’s it. You will see him in the new season‚” a curt Middendorp said at the time.

Baxter admitted that he continued to monitor Khune despite Middendorp's emphatic declaration until it finally dawned on him that he would not play a game for Chiefs until next season.

“Itu is not fit and he’s not played games‚" Baxter said.

"He is not back in full training and is not featuring for Chiefs at all.

"So to count on Khune will be a massive miss in our calculations.

“So we’ve waited and looked from afar‚ and I said‚ if he showed signs of getting back into things‚ we would address it.

"But it never got to that point because we’ve seen he’s not even on the bench at Chiefs.”

Khune watched from the sidelines as his club was embarrassingly beaten by lower tier upstarts TS Galaxy in the final of the Nedbank Cup in Durban on Saturday with his injury not yet completely healed.

Missing the Nations Cup means that Khune will not be able to add to the 91 Bafana caps that would have made him by far the most experienced player in the current team.

Bidvest Wits’ Darren Keet‚ PSL’s Goalkeeper of the Season Ronwen Williams from SuperSport United and Bruce Bvuma from Chiefs were named as the three goalkeepers in the provisional squad.

Baxter said he would trim the squad to 23 players 10 days before the start of the 32nd edition of Nations Cup in Egypt.