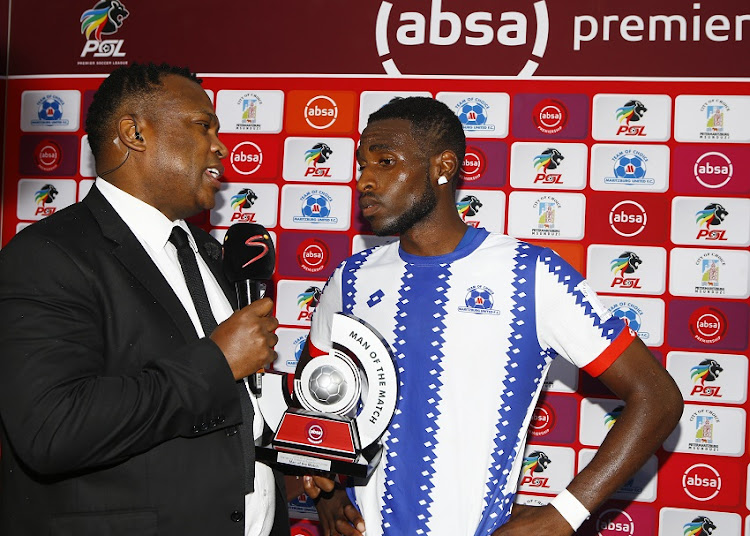 Former SuperSport commentator Robert Marawa with man of the match Fortune Makaringe of Maritzburg Utd during the Absa Premiership match between Maritzburg United and SuperSport United at Harry Gwala Stadium on May 04, 2019 in Pietermaritzburg, South Africa.
Image: Steve Haag/Gallo Images

Bafana Bafana coach Stuart Baxter on Tuesday named a provisional 28-man selection squad for a training camp in Johannesburg ahead of the Africa Cup of Nations (Afcon) in Egypt.

Two potential naturalised South Africans - Crystal Palace's 20-year-old centreback Nikola Tavares and FC Zurich right-back Joel Untersee - are two additional members named‚ who would take the squad to 30 in number‚ but will only arrive pending their paperwork being confirmed in time for the camp.

The "senior" Bafana camp in Johannesburg takes place simultaneously as South Africa competing at the Cosafa Cup in Durban in early June with a shadow SA Under-23 combination led by Olympic team coach David Notoane.

Bafana senior player Keagan Dolly was included in the Cosafa squad for the purposes of earning game time after an injury-plagued season at Montpellier in France's Ligue 1‚ and also in the Johannesburg camp.

Bafana have been drawn in a tough Group D at the Afcon - which runs from June 21 to July 19 - with Ivory Coast‚ Morocco and Namibia.

South Africa play their first match against Cote d'Ivoire on June 24‚ Namibia on June 28 and Morocco on July 1. All Bafana's matches are at Cairo's 30‚000-seater Al Salam Stadium‚ also known as the Cairo Military Production Stadium.

This is Bafana's second qualification out of the past three Afcon finals tournaments.

They reached Equatorial Guinea 2015‚ going out in the first round under Ephraim "Shakes" Mashaba.

Mashaba failed to qualify for Gabon 2017.