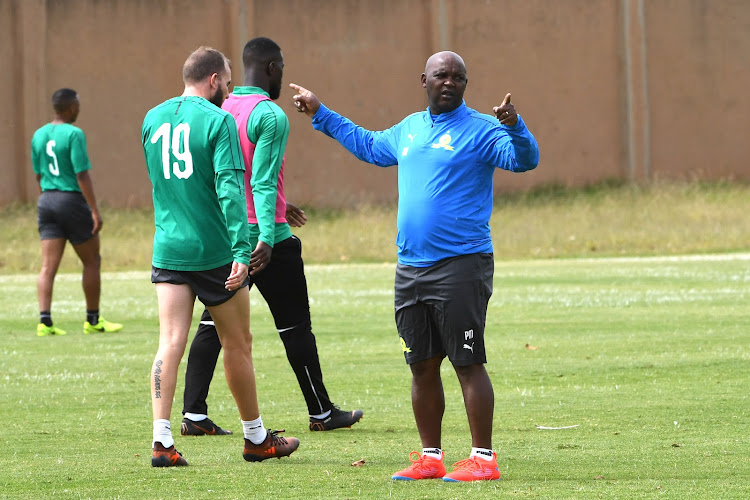 Mamelodi Sundowns coach Pitso Mosimane has admitted that his team are faced with a difficult task to overturn the 2-1 loss they suffered to Wydad Casablanca in the first leg of their Caf Champions League semifinal in Rabat last weekend.

The Brazilians take on the Moroccan giants at Lucas Moripe Stadium in the second leg on Saturday afternoon (3pm) needing a favourable result that will take them to their second Champions League final in four years.

Mosimane said on what is expected to be a fiercely contested clash that the away goal Sundowns scored in Morocco will only work for them if they score in Atteridgeville and deny Wydad from doing the same.

“We have a difficult task ahead of us. This is a big game for everybody‚” he said at his pre-match press conference in Atteridgeville on Friday afternoon.

“We have to score if we want to change the result and normally we score here [in Pretoria].

“It is not going to be easy but I believe the goal will come. I have seen Esperance‚ Al Ahly‚ Wydad here – we will play our normal game and we will go toe to toe.

“You know what happens when we play toe to toe‚ chances will be created at both sides.”

Mosimane added that Downs will have to go about their business in a smart way so that they are not caught napping in defence while trying to score.

“You can’t play thinking about stopping them from scoring because that means you won’t attack. If you attack recklessly‚ you are going to be vulnerable at the back‚ so it is a short winter blanket‚” the coach said.

“You try and do as much as you can to defend‚ but we need to attack because we need a goal. Maybe after the goal‚ it will be a different story but I believe there is more than one goal here.

“You just need to have a look at our whole programme from the qualifiers. There have been a lot of goals here.” Mosimane admitted the Champions League is a difficult tournament to win.

“The Champions League is a priority for Sundowns and that’s why we are in it the whole time. It is a difficult tournament to win and if it was easy then everybody would do it‚” he said.

“For the past five years‚ nobody has won it two times in a row and that shows how difficult it is to win it. It took a long time for a South African club to win it again after Orlando Pirates [in 1995] and that will make you aware that it is not easy.