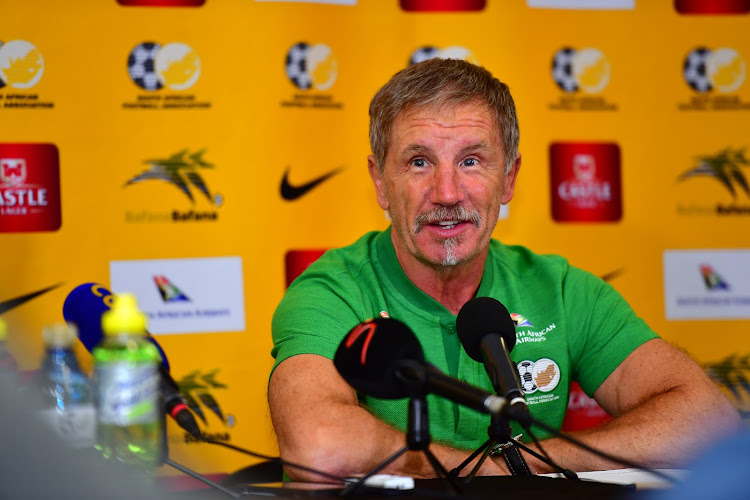 Baxter said the paperwork for Untersee‚ who was born in South Africa‚ to be available for Bafana is close to completion.

The Bafana coach wants to watch the right-back‚ once on the books of Juventus‚ and meet with him‚ as a consideration for bringing the player in for the Africa Cup of Nations in Egypt in June and July.

“I will be going to watch Joel Untersee play for Neuchatel Xamax in Switzerland‚” Baxter said.

“That’s because his paperwork is getting very close and I want to make a final check on him and decide if he’s a candidate for Afcon or not.”

Baxter left for Europe on Thursday night. He will also be viewing Liam Jordan on behalf of South Africa Under-23 coach David Notoane‚ and with a view to perhaps including the former Bidvest Wits striker in Bafana’s squad for the Cosafa Cup in Durban in June.

Jordan has been playing every game for HB Køge in Denmark’s first division (second tier).

Baxter has tracked Untersee (25)‚ who has also played for Brescia and Empoli in Serie B‚ for some time.

The coach said he was aware it might be disruptive bringing a completely unknown player into Bafana on the eve of a major tournament‚ and suggested he might also use Cosafa as a testing ground for Untersee.

It is also not the first time Baxter has believed Untersee’s paperwork to be near completion.

Explaining the complications with the documentation the coach said: “We thought it would be a simple process because he was born here. Burt he was born here to parents who weren’t South African‚ and who were not on‚ let’s say‚ the optimal visas at that time.

“Which makes the whole situation a little bit more complicated. Because either they have to seek [paperwork]‚ or‚ Joel has to go the long way round.

“And he’s already played for the Swiss Under-21s.

“Because I would be bringing in a lad who was not there in the qualifiers.

“In that case I’ve got to be 100 percent certain that he’s adding value to the squad.

“So I’ll look at that game. Hopefully while I’m away the papers will be ready to be stamped.

“And then I’ll have a heart-to-heart with Joel. And I’ll tell him what I think.

“‘Are you going to add value?’‚ or ‘I’m sorry‚ but this is not the right time. Maybe after Afcon we can slide you in’.

“But that is a consideration. You don’t just upset the group for no apparent reason just because he’s got a history that’s quite attractive.”