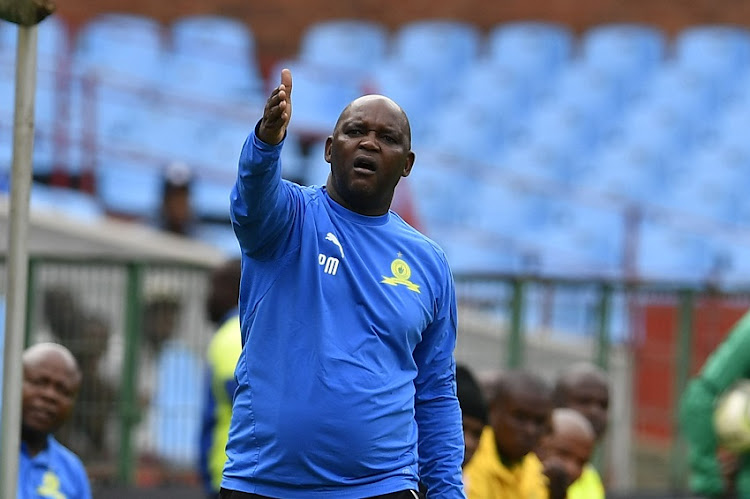 Mamelodi Sundowns coach Pitso Mosimane has stepped the mind games ahead of the penultimate round of the season and suggested that Absa Premiership title rivals Orlando Pirates have a better chance of winning the league title.

The two sides are tied on 53 points at the summit but Pirates have a superior goal difference that could come into play if they end the season still equal on points.

Sundowns are behind Pirates on goal difference of +13 to +17.

Mosimane suggested Sundowns are “still a team in construction”‚ and that they might have to settle for next year's PSL title.

“It is a bit difficult when you have the issue of goals‚ it is not in our hands but in Pirates’ hands‚” said Mosimane.

“It is still possible for us to win the league but it is not going to be easy to get the goals.

“I told you that Sundowns will win the league next year if we don’t get it this year.

“I am still going to say that we are a team in construction‚ we are feeling the departure of Khama Billiat and Percy Tau‚ but the boys keep on going.

“You can see I used a midfielder as a striker in Sibusiso Vilakazi and I used a centre-back in Rivaldo Coetzee as a central midfielder‚ because I have to do what I have to do and they respond.”

In the 2-1 win over Blacki Leopards on Tuesday in Thohoyandou‚ Sundowns conceded a goal in the closing stages of the match and Mosimane said it was not an ideal situation.

“I was very upset with the goal they scored‚ especially at that time‚” he said.

“But you have to understand because the players are a little bit tired.

“They just wanted to get over and done with the match.

“Sometimes‚ you can’t have the cake and eat it‚ you have to be a little bit grateful and don’t sound selfish.

“They fought and worked very hard after they travelled from Rabat to Thohoyandou.

“They gave their best effort and it is humbling to see these boys fight like this with two Champions League programmes in one year.

“There is no team in South Africa that has a programme like us – no one. It is unbelievable‚ they just play football‚ they are never home with their families but look at them‚ they are fighting and still want to win it.”

Sundowns meet Wydad Casablanca in the second leg of the Champions League semifinal at Lucas Moripe Stadium in Atteridegville on Saturday (kickoff 3pm)‚ having lost the first leg 2-1 in Rabat‚ Morocco last Friday.