PSL prepares to mete out heavy penalty to Siwelele 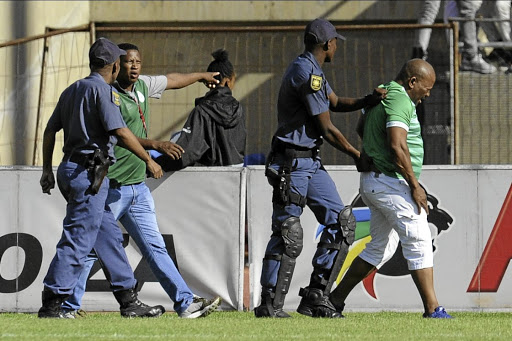 Police were called to control unruly Celtic fans who threw missiles before invading the pitch in a match against Cape Town City at the Dr Molemela Stadium on Sunday.
Image: Gallo Images/ Charle Lombard

Bloemfontein Celtic face a heavy and unprecedented sanction from the Premier Soccer League (PSL) after the league match against Cape Town City on Sunday had to be abandoned when fans went on the rampage.

Match referee Victor Hlungwane and commissioner Stephen Moshotle called off the fixture at the Dr Molemela Stadium after fans threw missiles and invaded the pitch.

The PSL received the match reports from Hlungwane and Moshotle yesterday and it was promptly announced that the club would appear before the disciplinary committee on April 25.

The PSL confirmed that Celtic have been charged with "failure to provide adequate security for the match and bringing the league, sponsors Absa, SA Football Association, Confederation of African Football and football governing body Fifa into disrepute".

This case is different from previous cases when Kaizer Chiefs fans went on the rampage at the Moses Mabhida Stadium and when Orlando Pirates supporters vandalised the Loftus Versfeld Stadium.

Both those games had outcomes and were played up until at least the regulated 90 minutes. The incident in Bloemfontein is different because the match was called off in the 23rd minute.

An insider close to the matter said the PSL could send a strong message to clubs and fans with an unprecedented penalty.

Celtic CEO Khumbulani Konco lambasted the behaviour of the fans. "This is very disappointing because we have been meeting with the fans regularly and we never expected this," Konco said.

"We know there has been a boycott and it seems this time they wanted to intensify their boycott."

Meanwhile, Sowetan has established that a sentencing process against Mamelodi Sundowns for fielding Wayne Arendse will commence on Friday. Downs were found guilty of unlawfully playing Arendse against Wits in October despite the defender not being on the team sheet.