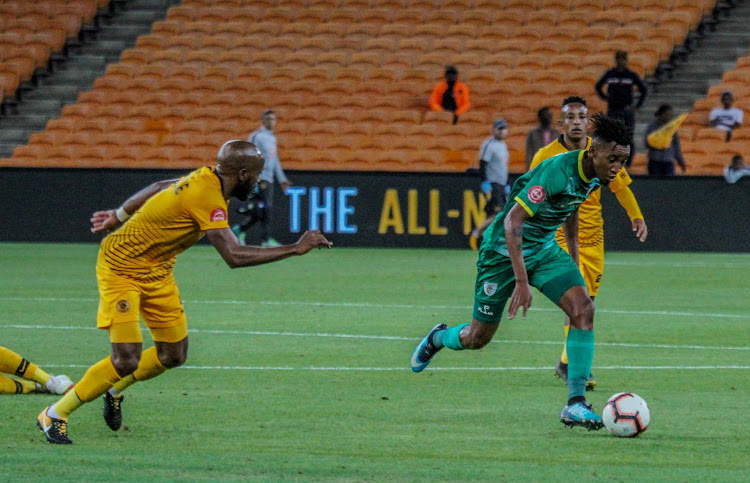 Matome Mabeba of Baroka FC gets away from Ramahlwe Mphahlele of Kaizer Chiefs during the Absa Premiership match at FNB Stadium on Saturday April 6 2019.
Image: Lebo Edgar/BackpagePix

If Kaizer Chiefs are serious about a decent Absa Premiership finish they will need to produce performances than their flat 1-0 defeat against log stragglers Baroka FC at FNB Stadium on Saturday evening.

Chiefs coach Ernst Middendorp had stressed the need during the week to take Baroka as seriously as Amakhosi had Cape Town City in a polished 2-0 Nedbank Cup shutout in Nelspruit on Sunday.

The cavernous FNB, where Amakhosi's 10,000-odd they attract against smaller teams, probably played a role, too, in it not being easy for the home team to come out at the same intensity against the relegation battlers as they had at a sold-out Mbombela Stadium last weekend.

But Chiefs did try to play at a crisp level, enjoying most of the possession and territory in the first half, without creating the sort of frequency of clearcut chances they would have liked to.

A drive from Hendrick Ekstein flashed close in the 10th minute.

For Baroka, a cross from winger Matome Mateba found Lawrence Ntwane up alone, but the lanky centreback was leaning back on his header.

Philani Zulu should have done better midway through the half when Bernard Parker won a header to a ball upfield to tee the midfielder up in the small box, but he steered wide.

Chiefs saw centreback Teenage Hadebe stretchered off in the 37th, as Middendorp opted for a tactical change, bringing on centre-forward Ryan Moon.

Amakhosi had another fine opportunity to take the lead soon after the break as Moon beat offside and took the ball round goalkeeper Elvis Chipezeze, but in doing so also took it wide, and rolled an attempted finish into the netting.

Chiefs' tempo improved from the change-rooms, and some of the buildups began to replicate what they had produced in Nelspruit last weekend. But they could not produce a clinical final pass.

Unable to capitalise on the ball and direction of play they were enjoying, Amakhosi conceded.

In the 65th, Dax won the ball off Baroka substitute Mduduzi Mdantsane on the edge of Chiefs' box. Referee Cedric Muvhali adjudged it as a foul.

Winger Patjie's free-kick was finely struck, but Amakhosi goalkpeeper Bruce Bvuma wrong-footed himself and could have done better with the reach.

After another fine buildup Ekstein created space but shot straight at Chipezeze.