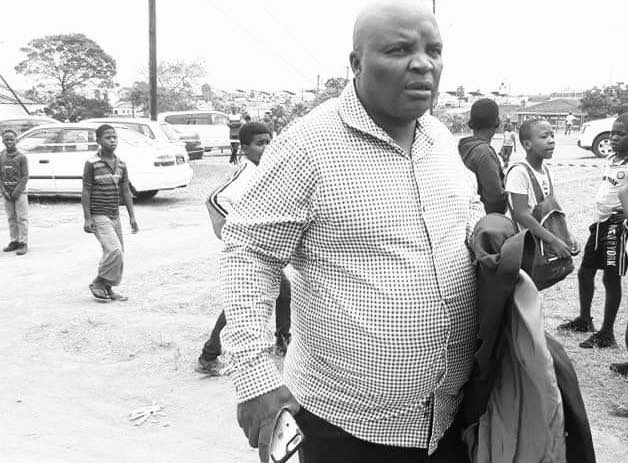 Tornado FC chairman Siphiwo "Mawawa" Nyobo and owner was gunned down outside a stadium shortly after watching a football match.
Image: Tornado FC/Facebook

Saturday March 2‚ 2019‚ began like any other day in East London and there was no hint to the mayhem and tragic scenes that would see Siphiwo “Mawawa” Nyobo lose his life in a hail of bullets by sunset.

Nyobo was his usual self when I saw him at North End Stadium on Saturday afternoon and I could not have guessed that he was watching his beloved Tornado FC players for the last time when they faced Birmingham City in an ABC Motsepe League match at the East London venue.

The stadium was packed and Nyobo watched the game alone from a distance‚  leaning against a tree in his trademark manner as he always did when he watched his team play.

But the prominent East London businessman and traditional healer still found the time to smile and engage the many passersby who stopped to greet him.

He stood next to the tree until the game ended and then waited for the members of his technical team (head coach Tshepo Motsoeneng‚ his assistant Vuyisani Mangaliso and team manager Simphiwe Magongo) to conclude their post match responsibilities after Tornado beat Birmingham 4-1.

His excitement was unmistakable when Motsoeneng and his colleagues finally joined their boss and after speaking to the other members of his staff‚ he then had a chat with me.

Our conversation was interrupted when one of his former players came over with his daughter to greet him and after smiling at the little girl‚ Nyobo produced a hundred rand note and gave it to her.

“This is for you only my child and not for your dad‚” Nyobo joked before returning back to me.

He reiterated his burning ambition to see Tornado competing in the National First Division in the not too distant future‚ adding that he was working very had to ensure that the team retains the third-tier league title and also reaches the ABC Motsepe League promotional play-offs again this year.

The soft-spoken but passionate football lover talked about how his charges would become unstoppable if they continued to win matches‚ proudly pointing to the way they were able to juggle their league commitment with their high-profile meeting with Kaizer Chiefs at the Sisa Dukashe Stadium in the Nedbank Cup recently.

He was in such high spirits and his excitement was contagious.

We parted ways soon after that and little did I know that I would never see him alive again.

I was told moments later that Nyobo’s vehicle was sprayed with bullets at Lennox Street next to the stadium moments after we parted ways.

Police said the 68-year-old was shot several times in his upper body while the female driver of the vehicle has a bullet wound on the upper body.

It is alleged that three gunmen who were on foot were waiting for him at the venue’s first entrance and more than 14 bullet cartridges were found at the scene after their ghastly actions.

I am still in shock and  haven't wrapped my head around the fact that I am one of the last people to see him alive.

Saturday March 2‚ 2019‚ as it turned out‚ was no ordinary day for us folks in East London and it will always be associated with Siphiwo “Mawawa” Nyobo's cowardly assassination.