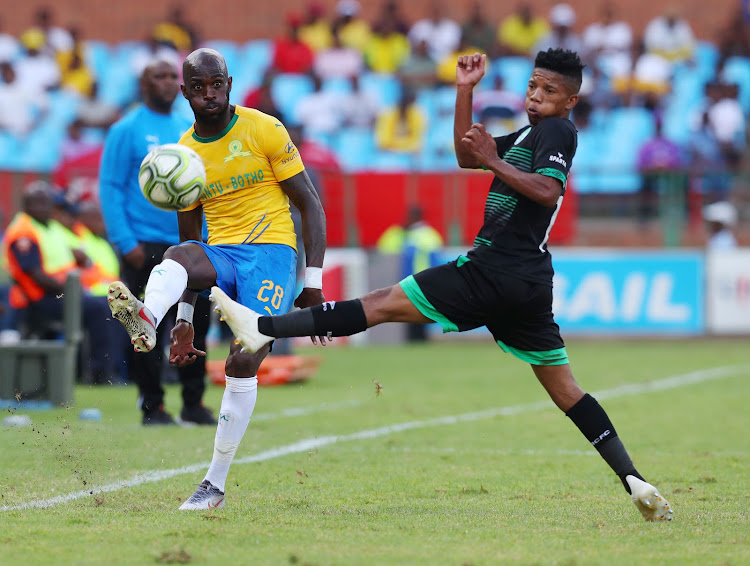 Mamelodi Sundowns remain at the head of the Premier Soccer League standings but dropped potentially vital points when held to a goalless draw at home by Bloemfontein Celtic on Saturday afternoon.

It was the fourth scoreless draw in the last five meetings between the two sides as Celtic continue to be a bogey team for Pitso Mosimane.

It will come as a welcome result too for the chasing pack in the title race, keeping alive the battle for the championship.

Plaudits to Celtic, who showed guts and fight in holding off the defending champions, who came into the game with their tails up after beating Cape Town City 3-2 at the same stadium in midweek and going top of the log.

They also had to play with concern in the back of their minds after centre back Wandisile Letlabika suffered potentially serious injury just before the break.

The end of the first half was delayed by 12 minutes after Letlabika hit the upright as he tumbled down from an aerial challenge, banged his temple against the post and suffered concussion. Doctors took no chances and treated him on the pitch before wheeling him off to hospital, although later said he was responding positively..

The first half saw Sundowns dominate but with a languid air as their build-ups were slow, often too predictable, almost as if they were saving themselves for future games.

But they did still manage to conjure up plenty of work for Patrick Tignyemb in the Celtic goal with the ex-Cameroon international saving from Themba Zwane and also seeing snap effort from Tebogo Langerman, Gaston Sirino and Anthony Laffor going wide.

Sirino set up most of the chances as he drifted from one side of the pitch to the other, conducting the Sundowns’ attacking orchestra.

It was Celtic who had the first real attack of the game, after six minutes, when Tebogo Potsane, one of four changes they made after Sunday’s home loss to struggling Free State Stars, hit a powerful shot that Kennedy Mweene stopped.

But after, that Celtic never really threatened despite the presence of the league’s leading goal scorer Tshegofatso Mabasa, who did well in holding up the ball but did not have the requisite support.

But after the break, the visitors had a lively 15-minute spell with Potsane and Mabasa combining to force a save out of Mweene and then Potsane, in a good position, hitting a tame effort straight at the Sundowns’ ‘keeper.

But Sundowns resumed their dominance after the hour mark, this time with more urgency but still wasteful in attack.

A double change with some 15 minutes to go brought Lyle Lakay and Emiliano Tade into the fray but as Sundowns got more desperate, so Celtic proved more proficient in defence, holding on for a morale-boosting point ahead of Tuesday’s meeting with Orlando Pirates in Soweto.

Laffor might have won it in stoppage time as Tade set him up but, again, missed, summing up a frustrating afternoon for the champions, who are now on 40 points with nine games to go.