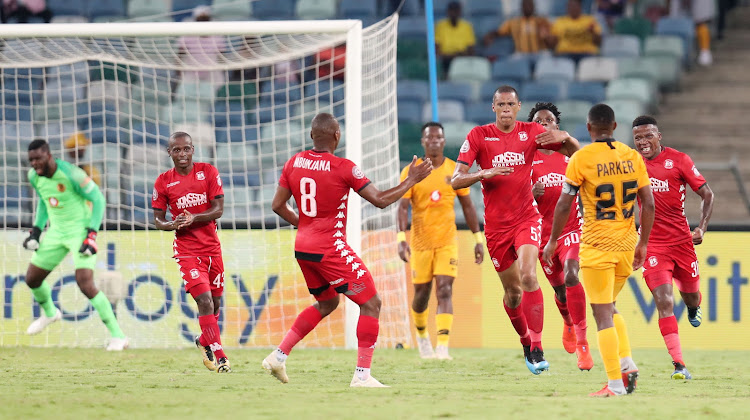 Bevan Fransman of Highlands Park celebrates goal with teammates during the Absa Premiership 2018/19 match between Kaizer Chiefs and Highlands Park at the Moses Mabhida Stadium, Durban on the 02 March 2019.
Image: ©Muzi Ntombela/BackpagePix

They were not at their very best in their 3-2 win over Highlands Park but Kaizer Chiefs coach Ernst Middendorp will no doubt accept a good and effective win like this where they bagged all the three points at Moses Mabhida Stadium in Durban on Saturday evening.

Amakhosi went into this clash on a run of three league matches without a win following defeat to Cape Town City and draws with Orlando Pirates and Polokwane City but they gave a performance that moved them from seventh to fifth place on the standings with 32 points.

Looking at the bigger picture, they trailed Saturday afternoon’s log leaders Mamelodi Sundowns by eight points with one more game and their hopes of winning the league remain far-fetched.

They will have to be careful of a dangerous banana skin in the form of relegation haunted Maritzburg United whom they host in their next match at FNB Stadium on Saturday.

For the beaten Highlands Park coach Owen Da Gama, conceding three goals is always a sign of defensive problems and they will have to improve when they welcome unpredictable Baroka in Makhulong this weekend.

Highlands attacked early in the game through midfielder Lindokuhle Mbatha but he could not belief his misfortune when his close range shot went past the upright with Chiefs goalkeeper Daniel Akpeyi beaten after they failed to clear the danger.

After a slow start to the game, Chiefs found their footing and started to create attacking chances through Pule Ekstein, captain of the day Bernard Parker, George Maluleka and Leonardo Castro but they could not find the opening.

Amakhosi got it right six minutes from the half time break when Parker slotted the ball beyond the reach of Highlands Park goalkeeper Marlon Heugh after he received the ball from Castro after Ekstein started the move from the midfield.

Their celebrations were short lived as Highlands equalised a minute later when Bevan Fransman rose the highest inside the box to beat the outstretched hands of Akpeyi after the Chiefs defence failed to deal with a long throw in by Ryan Rae.

Highlands nearly increased their lead but Sabelo Nyembe could not beat Akpeyi and on the stroke of half time referee Jelly Chavani called a goal kick after Dumisani Zuma went down in the box from a challenge by Luckyboy Mokoena.

Four minutes after the break, Castro turned the finisher this time around for his fourth goal of the season as Chiefs increased their lead when he finished off a cross from the left flank by that was delivered by Siphosakhe Ntiya-Ntiya.

Chiefs took control of the match after 71 minutes when Zuma pounced on a loose ball that ricocheted off a Highlands Park defender to riffle home a low shot past Heugh and Lesenya Ramorake scored the last goal of the match a few minutes later but it proved to be a scant consolation.