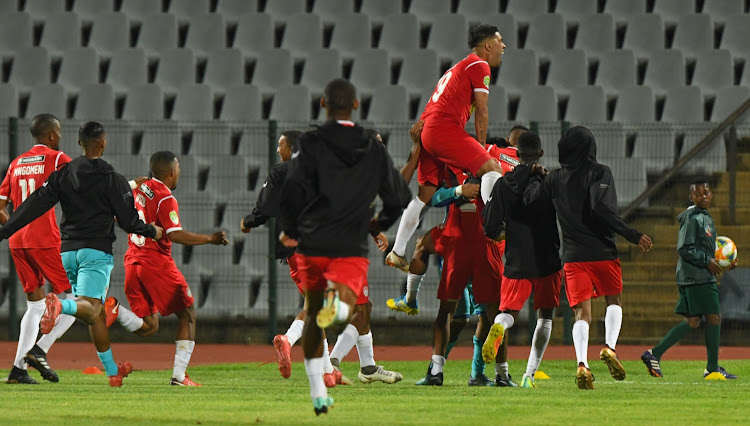 The Magic FC players celebrate after their Nedbank Cup last 32 round penalty shootout win over Macabbi FC at Volkswagen Dobsonville Stadium in Soweto on January 29, 2019 to set up a last 16 tie against Soweto giants Kaizer Chiefs.
Image: Sydney Seshibedi

Kaizer Chiefs will be overwhelming favourites to beat Western Cape ABC Motsepe League side The Magic FC at the Nelson Mandela Bay Stadium on Sunday‚ but after being given a scare by Tornado FC in the last round should take nothing for granted.

This is especially so as since South Africa’s premier knockout trophy switched to being known as the Nedbank Cup in 2008‚ no top-flight side has lost more games to lower-league opposition than Chiefs.

The Amakhosi have been bundled out of the competition by teams in the divisions below them on four occasions‚ including a famous win for then third-tier Baroka FC in the quarterfinals in 2011.

And three of those defeats have come at the last-16 stage over the past 10 years.

The team were first shocked by University of Pretoria in the second round in 2009 when they were edged 4-3 in a seven-goal thriller.

AmaTuks went on to the final that year but lost to Moroka Swallows in the decider with a number of players who would go on to play for bigger clubs‚ including Chiefs.

Chiefs led through Jose Torrealba who bizarrely fisted the ball into the net as he lay on the ground having been brought down by the keeper‚ but Tuks were level as Phenyo Mongalo‚ a future Orlando Pirates player‚ beat Itumeleng Khune from a tight angle.

The National First Division side then took the lead as Thabo Moleko lobbed Khune‚ but Siphiwe Tshabalala brought Chiefs level at 3-3 as he converted a spot-kick after Kaizer Motaung Jnr had been fouled‚ an incident that saw Tuks skipper Obert Moyo red-carded for his protests.

With the National First Division side down to 10 men it was assumed Chiefs would stroll home in the closing stages‚ but instead it was Tuks who scored‚ Mongalo adding his second.

It was déjà vu for Chiefs the following year as they were beaten 2-0 at the same stage by now-defunct FC Cape Town.

Lyle Lakay‚ now a star at Mamelodi Sundowns‚ gave the African Beasts the lead and the home team got a second through Samuel Eboule Bille. Chiefs were the better team on the day‚ but wasted numerous opportunities.

Then came what was at the time the biggest upset in SA football history as Baroka FC ousted Chiefs 2-1 in the 2011 quarterfinals‚ the first and only time they have lost to third-tier opposition.

It all appeared to be going to plan for Amakhosi‚ as Zimbabwean hotshot Knowledge Musona put Chiefs ahead‚ but Baroka were back on level terms just a minute before the break‚ veteran Sam Ndlovu heading home from a corner to stun the visitors.

Baroka striker Thobani Mncwango‚ who later played for Polokwane City and Bidvest Wits‚ bundled the ball home in injury time after a melee in the box.

Other Baroka players from that day who would go on to have solid professional careers include Lantshene Phalane‚ Katlego Mashego‚ Sifiso Mbhele and Olaleng Shaku.

Chiefs’ last loss to lower league opposition came in 2015 when they lost 2-1 to second-tier Black Leopards.

Morgan Shivambu fired Leopards in front‚ but Willard Katsande grabbed an equaliser with 12 minutes to go. Just as it seemed extra time would be needed though‚ Roggert Nyundu popped up with a winner for Lidoda Duvha.

After their Soweto derby performance, Kaizer Chiefs will feel that the team has made progress in the two months.
Sport
3 years ago

Kaizer Chiefs coach Ernst Middendorp was pleased at how new goalkeeper Daniel Akpeyi handled the pressure of being thrown in the deep end for ...
Sport
3 years ago
Next Article