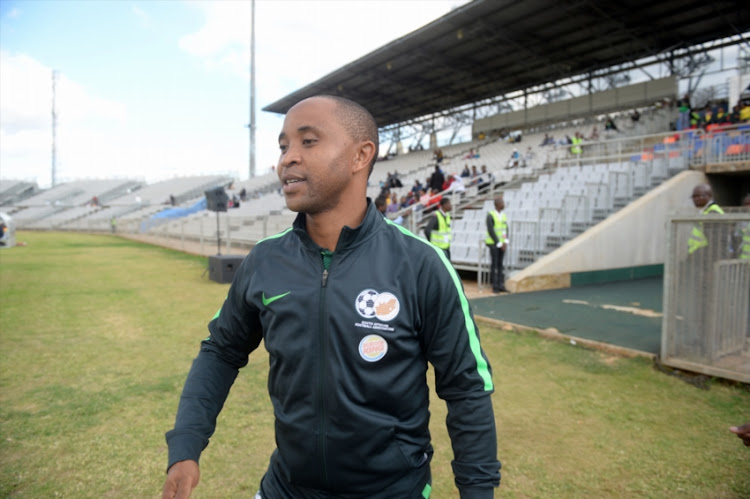 South Africa coach Thabo Senong during the 2nd Leg of the CAF U20 Africa Cup of Nations Qualifying match between South Africa and Mozambique at Moruleng Stadium on May 20, 2018 in Rustenburg, South Africa.
Image: Lefty Shivambu/Gallo Images

Amajita coach Thabo Senong has had his struggles having his sizeable European-based contingent arrive for a pre-Africa Under-20 Cup of Nations camp‚ but the amount of players he has available from overseas still pleases him.

Senong was expecting English Premier League club Leicester City’s 19-year-old forward Khanya Leshabela to arrive in the camp‚ which serves as preparation for next month’s U-20 Afcon in Niger‚ after honouring an U-23 fixture for his club.

Senong‚ though‚ admitted that such a high number of young players based in Europe – only one of them in a lower league – Kodisang in the Portuguese third-tier – was unusual and highly promising for an SA Under-20 team.

“I think the past three years has been a good transition phase for South Africa football‚” the Amajita coach said.

“Honestly‚ clubs have exported a lot of players. That augurs well for our football.

"Because overseas football offers opportunities where players get to play Uefa Champions League at youth level (Uefa Youth League)‚ and friendlies in other countries because Europe is such a centralised area.

“It adds to their mental toughness.

"It’s always good‚ because when we had young players travelling abroad 15 years ago – like Benni McCarthy‚ Steven Pienaar and Quinton Fortune – you could see that they were well developed when they came to serve Bafana Bafana.”

Senong’s camp will be in two phases.

This week‚ after starting at the Nike Training Centre in Soweto‚ Amajita travel to Nelspruit on Wednesday afternoon where they will play two friendly games‚ including one against the senior team of Mozambican club Costa do Sol.

The second phase is still to be finalised in Senegal‚ with a potential friendly against that country’s U-20s.

Right-back Sibusiso Mabiliso will join Senong’s squad after playing for AmaZulu in their Absa Premiership fixture against Kaizer Chiefs in Durban on Wednesday night.

Senong appears to have some some genuine talent to chose from.

Among the attackers are Kaizer Chiefs’ recently-promoted playmaker Nkosingiphile Ngcobo and Mamelodi Sundowns left-wing Promise Mkhuma‚ the player of the tournament when Amajita won the Cosafa U-20 Cup last year.

SA are in Group A of the U-20 Afcon – which runs from February 2 to 17 – along with Nigeria‚ Brundi and hosts Niger.