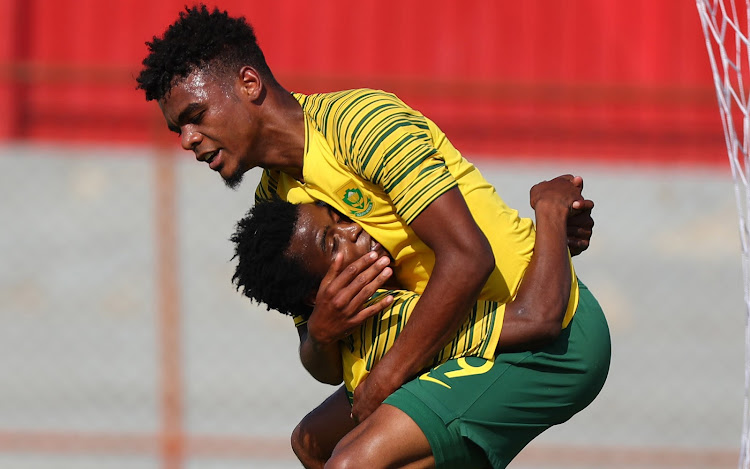 Orlando Pirates' AS Monaco-bound teenage striker Lyle Foster celebrates after scoring his second goal in a 5-0 romp over Mauritius in their opening match of the Cosafa Under-20 Championships in Kitwe, Zambia, on Sunday December 3 2018 at Nkana Stadium.
Image: Safa.net/Twitter

South Africa coach Thabo Senong says he is pleased with the start made by his side in their 5-0 mauling of Mauritius in their opening Group B clash at the 2018 Cosafa Under-20 Championships in Kitwe‚ Zambia on Monday.

Senong is using the regional tournament to prepare his side for the 2019 African Under-20 Championships in Niger in February‚ where they will hope to qualify for the World Cup in Poland later in the year.

Amajita scored all of their goals in the first 38 minutes‚ but failed to break down the islanders in the second period‚ with the job already done.

"We did well‚ the players stuck to the game-plan‚” Senong said.

“First games are never easy‚ so it is important to create chances‚ not concede goals and reduce the number of mistakes.

"But you can never underestimate any team in this tournament. There was an improvement with Mauritius in terms of their height and how they organised themselves in the second half and they did not give us a single goal after halftime.

"Our individuality helped us in some moments‚ and the combination play we have.

"We were hoping to get one or two goals on set-plays but Mauritius stopped us. We know where we are going [Under-20 Afcon] set-plays are going to determine games. You can never rely on scoring goals in open play only.”

Senong says he has had to rebuild to a certain extent after missing a number of players he would have liked to select that were not released by their clubs.

"It is very difficult because we have debutantes and are giving away new caps. We have lost 30 percent of our players to PSL clubs because it is now in season and players were not available.”

Next up for the side is eSwatini on Saturday‚ were Amajita will seal their place in the semi-finals with a win as the pool was reduced to three teams following the late withdrawal from the competition of Namibia.

A draw would also be enough if eSwatini and Mauritius draw their pool game on Thursday.

"eSwatini have prepared well‚ better than us‚ they've had longer camps‚” Senong says.

“We are still trying to find our rhythm and you could see in the second half our game dropped a bit.

"We must fix our mistakes and prepare well. It’s our objective is to come out of the group but we must take it one game at a time.

"I watched the first games [on Sunday] and I could see the standard has improved compared to last year. There is progress in terms of talent and even the quality of the coaching‚ the tactics and the game-plan.”

Senong was coy on whether his side would defend the title they lifted last year by beating Lesotho in the final.

"We will always respect every opposition and stick to our game-plan. This Cosafa is vital preparation for us to go to the Under-20 Afcon in Niger in February next year.”

Orlando Pirates' inconsistent run at home may come back to haunt them in their bid to win the Absa Premiership title with the goalless draw against a ...
Sport
3 years ago

The South African Football Association (Safa) has taken a decision to accept the Confederation of African Football’s (Caf) request to step in as ...
Sport
3 years ago
Next Article