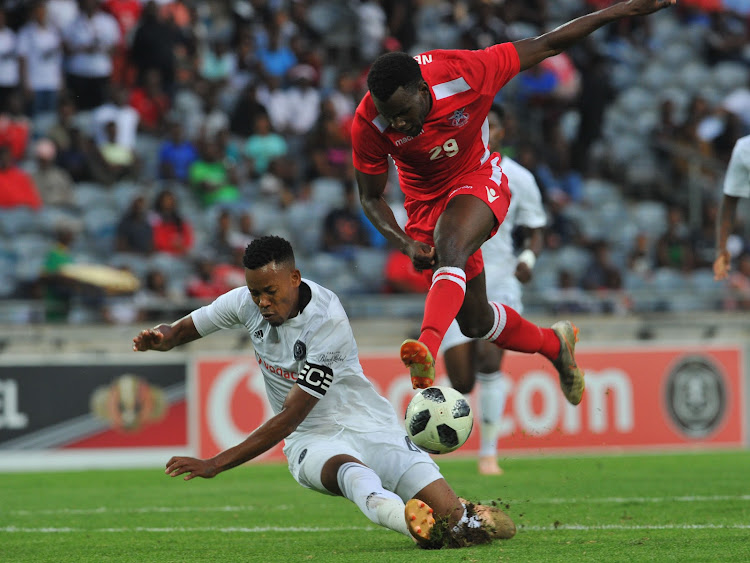 Orlando Pirates’ qualification to the money-spinning group phase of the Caf Champions League is hanging by thinnest of threads after they were held to a surprise goalless draw by little known Namibian outfit, African Stars, in the first leg of the second round of Africa’s premier club competition.

The Buccaneers created all the big openings in this encounter to take a healthy lead to Windhoek next weekend but woeful finishing accompanied by some good saves made by Stars gloveman, Ratanda Mbazuvara, saw the two teams leaving all to play for in the second leg.

With many South Africans having already started their festive holidays, this match turned out to be one of the poorly attended at this Soweto venue this year.

Only around 10,000 die-hard Bucs fans heeded Bucs coach Milutin Sredojevic’s call to come and offer support to his men who have struggled with consistency at home this season.

When looking back at this match Sredojevic will count a number of good chances his players wasted, with the best two coming in either half.

Linda Mntambo shot wide after connecting well with Justin Shonga’s well worked free kick in the 21st minute and Shonga himself headed wide with no one closing him when he received a cross from Vincent Pule at the start of the second stanza.

The Namibian team also proved to be no pushovers in this match with their players not afraid to turn defending into attacks, although their finishing left much to be desired.

Stars striker Haleluja Nekindi should have given the visitors the lead when he was put through inside the box on the stroke of half time but his slow reaction helped Bucs captain Happy Jele to recover in the nick of time to block his shot.

As been the norm when playing in this competition, Bucs coach Sredojevic made a number of changes to his regular starting XI, with goalkeeper Siyabonga Mpontshane, midfielders Thembinkosi Lorch, Musa Nyatama, Xola Mlambo and striker Augustine Mulenga among the big names starting this match on the bench.

But when the going got tough in the second half Sredojevic did introduce Mulenga, Lorch and Thabo Qalinge for Mpho Makola, Meshack Maphangule and Abbubaker Mobara buy they too failed to change the complexion of the proceedings.

A winner in Windhoek will join other 15 teams in the group stages and for now only the defending champions Esperance of Tunisia have qualified by virtue of not being part of the elimination rounds.

The 15 Champions League losers of the first round will drop down to the Caf Confederation Cup last 32.

The Buccaneers had an easy passage in the preliminary round where they were pitted against Seychelles minnows, Light Stars. Two goals from Mntambo in each legs guided Bucs to a 8-2 aggregate score.

Stars reached the final round after beating Volcan Club from Comoros 2-1 in Windhoek through Chrispen Mbewe and Gustav Isaak after the first leg ended in a 0-0 stalemate in Comoros.

South African football has been left mourning the death of one of its rising refereeing stars‚ Eketsang Setloboko‚ who died in a car accident on ...
News
3 years ago

Kermit Erasmus says he fell in love with Cape Town City from afar and had no hesitation in signing for the club when approached to come back to the ...
Sport
3 years ago
Next Article