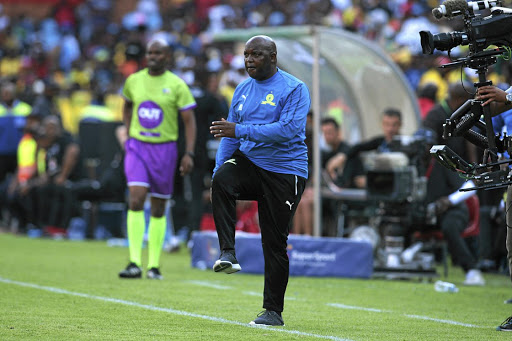 While most team's Christmas wish is to finish the year in a good spot within the top half, Mamelodi Sundowns have bigger ambitions.

The Brazilians are looking to extend their record by qualifying for the group stages of the CAF Champions League for a fourth successive year. Downs have a tie against Ahli Benghazi of Libya to overcome in order to make it to the group phase of the competition.

The eight-time Premier Soccer League champions will take on the Libyans on Sunday (5pm) in Egypt as a result of the war in their own country.

Coach Pitso Mosimane admits that their aim is to contain the North Africans at the Petro Sport Stadium.

"If we don't score then we must not concede and sort it out here [in the second leg]. Our play gives North Africans a tough time. They don't like teams that dribble a little bit," Mosimane said.

The 2016 CAF Coach of the Year concedes that his technical team has very little information on their opponents.

"It's difficult because we can't get footage. A team has to be on TV and they are not on TV. But we sent our analyst Goolam Valodia and he got something.

"We have a direction of the kind of team they are. They are North Africans and have the same culture of football with European influence."

Win in Libya will boost confidence
Sport
3 years ago

In their goalless draw in midweek against Baroka, the Chloorkop-based side were without a number of key players including Themba Zwane, Mosa Lebusa, Ricardo Nascimento and Rivaldo Coetzee through injury and suspension.

According to Mosimane, the demanding game schedule was starting to take its toll on the players and he hoped to have some players back.

"It won't be easy. We have to go through Dubai but that's what happens in Champions League. I think we played three games in seven days, that's why we have muscle injuries and all that."