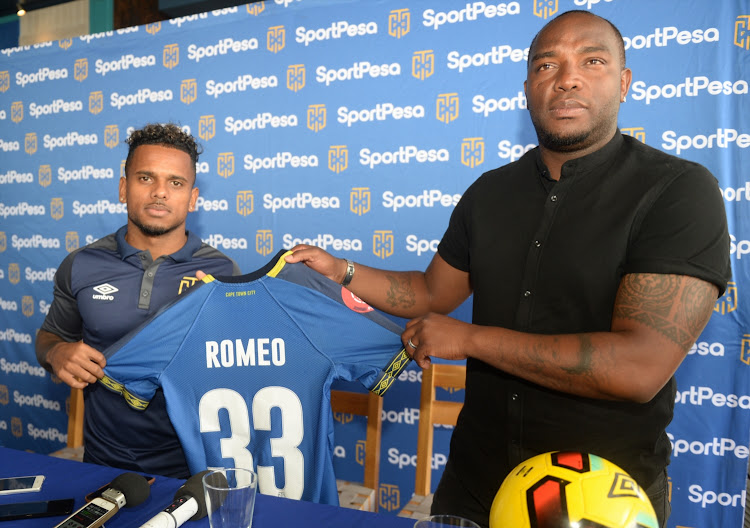 Cape Town City new signing Kermit Erasmus pose with his new coach Benni McCarthy during a press conference for his unveiling at The Greek Fisherman in Cape Town on December 13, 2018.
Image: Grant Pitcher

Kermit Erasmus says he fell in love with Cape Town City from afar and had no hesitation in signing for the club when approached to come back to the Premier Soccer League (PSL).

The diminutive striker has spent the last three years away in Europe but had little playing time in spells at four different clubs and says he is happy to be back home and pairing up with City coach Benni McCarthy.

“I’m happy to be here‚ I just cannot wait to get going in the new year‚” he said on Thursday as he was introduced to the media at the club’s Christmas party.

“I’ve been away for long time and I think coming home to Cape Town City is the right fit for me – not only for footballing reasons but beyond that as well.

“I fell in love with the team from afar‚ just watching how they do their thing.

“I don’t have to say much about the coach but he’s a legend. He knows what I think of him.”

“I’m married with two kids and that also makes Cape Town a good environment not only for me but for my family too. If the family are happy‚ then I’ll be happy too and try to be the best I can be on the field.”

Asked if this could prove a springboard back to the Bafana Bafana ranks‚ Erasmus added: “For me now‚ it is just to start playing again and get the sense of enjoyment back on the field. I haven’t played for a long time.

“And doing what I love: scoring goals‚ winning games‚ creating goals. If I get that done then there is obviously opportunity to join up with the national team again but it is all up to me. I’ll focus on the basics first and the rest will follow.”

City owner John Comitis said: “It’s a great day that Kermit has joined us. Seventy two hours of a lot of hard work and pressure resulted in us signing Kermit.

“It all starts with a seed that gets planted by the coach – he drops the name at the office. He says‚ ‘There is a possibility’.

“He does his magic in the background‚ I do the dribbling in the front and eventually the two ends meet and we have a player like Kermit at Cape Town City.”

McCarthy added: “I know what he can do and I told the chairman it was important we equip the side with him.”

Erasmus can only play after the transfer window opens in January and is a targeting a debut against SuperSport United in Atteridgeville on January 5.

Kermit Erasmus is returning to the Premier Soccer League after Cape Town City added him to their squad‚ announcing his signing on Wednesday.
Sport
3 years ago

Cape Town City squandered much needed points as they let an early lead slip and were held to a 1-1 draw in the Premier Soccer League at the Athlone ...
Sport
3 years ago
Next Article